Review: Blood and Other Cravings, edited by Ellen Datlow 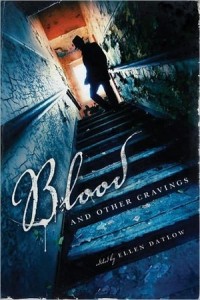 I was very excited to receive this collection of stories. This is the third Ellen Datlow collection I’ve read, the second that I’ve reviewed, and I think she does a great job of choosing really interesting stories that all play to a theme. Blood and Other Cravings

isn’t your typical book about vampires. These aren’t necessarily creatures that suck your blood and hate garlic, but they are creatures who steal something essential from you. They draw something — energy, will, love, vitality — from you and leave your diminished. They aren’t terribly happy stories, not surprisingly. Two of them were so cruel that I found them deeply disturbing. But all in all, this is a very good collection.

It’s always tough to review a book of short stories. Where do you begin? What if you love some stories and hate others? This is pretty easy review, though: most of the stories were quite good. I didn’t love the collection as much as I did Naked City, but I think that is partly because of the subject matter. Talking about something that sucks the life out of you — even if we’re not talking about your blood — is not cheery. But the stories aren’t all doom and gloom, they just aren’t as funny as in some of the other collections.

I particularly enjoyed “X for Demetrious” by Stephen Duffy. It is based on the true story of a man who was found dead in his apartment, surrounded by lines of salt, bottles of…waste, and cloves of garlic. It is a distressing look at a mind that is caving in on itself. I was also thrilled to see a story from Kathe Koja — I reviewed her novel Under the Poppy last year and loved it. “Toujours” is not a vampire story, but it is a story about losing the thing that sustains you, having it taken away from you. It fits right in, in its own way.

I also really enjoyed “Blood Yesterday, Blood Tomorrow” by Richard Bowes. I could easily understand the appeal of the mementos of “Myrna’s Place” and other, similar establishments, the feeling that you knew a little something that the world at large did not know. I have always found there is nothing quite as enticing as being in the inner circle, knowing the secret stuff that others can’t guess at — very, very alluring. And if you can profit from that, why not?

There were two stories that I found very disturbing. These were stories of cruelty that haunted me for a bit, a look at being the vampire that was not at all appealing. The first was “Mrs. Jones” by Carol Emshwiller. A lonely woman makes a discovery that lets her get something she desperately wants and also gives her a mean little triumph over her equally lonely sister. But what she is willing to do to get it! It brought out all my protective instincts. The second story was “Mulberry Boys” by Margo Lanagan. It’s a little difficult in the beginning, purposely so, to sort out exactly what is going on, but once you do…shiver. Again, you can’t help but feel a deep sympathy for the poor fellow, with his gentle protests. I found it much more distressing than the stories of more forthright violence.

Overall, this is an excellent collection. There are stories that look at the theme from a variety of angles. There’s a bit of humor (“The Baskerville Midgets” by Reggie Oliver) and a couple of good scares.

My copy of Blood and Other Cravings

3 comments for “Review: Blood and Other Cravings, edited by Ellen Datlow”