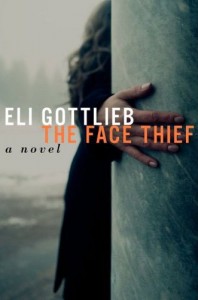 There is something I find really intriguing, at least in novels, about a female criminal. Their motivations seem so different from most male criminals — it never seems to be just about greed or power. It’s something more subtle. In The Face Thief

by Eli Gottlieb, Margot is a promising young journalist. It doesn’t take long for her to realize that the lavish lifestyle she can glimpse from her assignments is just out of her grasp…but there are ways to extend her reach.

Margot meets Lawrence Billings, a man who is an expert at non-verbal communication. He teaches seminars on body language and reading a person’s face and what their physical attributes can tell you about their personality. Margot is eager to learn, maybe a little desperate, and she is able to use the things she learns from Lawrence to turn more men into her victims. She’s not a killer, but she still destroys their lives. She is beautiful and cunning and ruthless and she takes them for everything they’ve got. Even Lawrence is swept under, in his own way, as she turns his techniques against him.

This is an interesting read, told in a sort of disjointed way, with bits and pieces of the stories of the main characters told moving backwards and forwards in time. There is Margot — her troubled childhood, her ruthless nature and the destruction she leaves behind. There is Lawrence, who is interested in teaching Margot because he senses she is someone special. He eventually pays the price for getting involved with her, even though he tries to do the right thing. There is John Potash, lured into Margot’s web and faced with the destruction of his life and family. And there is Dan France, the mystery man at the hospital, who may decide to throw it all away…

I enjoyed the mystery and the way the reader had to piece the story together. I enjoyed the characters, for the most part. I have to say that I found the subject matter a little harder to swallow. I absolutely believe that you can tell a lot about a person from their body language and their non-verbal cues, but face reading goes well beyond that. Do I really believe that you can tell that someone is an obsessive-compulsive by the indentations at their temples? That people with few friends have short eyebrows or that people who seek attention have deeply cleft chins? Or that you can tell the details of my childhood from my hairline?

“The hairline is like a graph of life during adolescence.” He traced the laser dot along the ridges of her hairline. “And this jagged edge right here, well, that probably means our friend Margot’s adolescence was less than smooth sailing, am I right?”

“You’re right,” she said, speaking intentionally loud enough to be picked up by the overhead mike. “Like many people I had a difficult, um, transition to adulthood.”

However, I have to admit that, writing this review only a few days after finishing the book, I find that it didn’t really stick with me. I enjoyed it, recommended it to a friend of mine who I think will also enjoy it very much, but I didn’t remember the names of the characters and I had to double check several details as I was thinking this through. Some books are just like that — a pleasure while you read them, but one that fades quickly once you’re done.

My copy of The Face Thief

was a review copy provided free of charge.

Wondrous Words Wednesday
Review: Bleed for Me by Michael Robotham

1 comment for “Review: The Face Thief by Eli Gottlieb”