Review: Bleed for Me by Michael Robotham 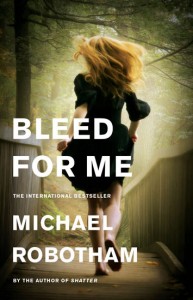 Joe O’Loughlin is an unlikely hero. He’s a psychologist with a failing marriage, serious health problems a troubled relationship with his daughter. He’s in a holding pattern, not sure if he’s looking for a safe place to land or just circling until he runs out of fuel and crashes. He makes some bad choices in Bleed for Me

Joe gets a late-night call from his estranged wife, Julianne. Sienna, his daughter’s best friend, showed up at the door, covered in blood, and then ran away. Joe finds her — wet and shivering, silent, eyes flat and staring. By the time she comes around at the hospital, Joe will have the news: her father, decorated police officer Ray Hagerty, is dead. And it looks like Sienna killed him.

Maybe I’m a little burnt out on family drama right now. This is a pretty good mystery — there’s a lot of suspense, a good lead-up to discovering the killer, some misdirection and at the center, a troubled man, struggling against some pretty long odds. I just didn’t find it as moving as I had hoped.

Sienna is a difficult character for me, although that probably means Robotham has done an excellent job of writing a teenager. Most of the time, I want to whack her on the back of the head with something. She is that special teenage blend of stubborn and pathetic; she desperately wants help but she is dead-set against doing anything to help herself. Even when it becomes clear that she is in real danger — danger of being railroaded for her father’s murder and possibly a target of the real killer, if she’s not the real killer — she is unwilling to tell the truth, unwilling to give Joe anything to work with. He’s a psychologist, he understands what he’s dealing with, but getting through to her is a long, slow process.

Mr. Parkinsons is a main character in this novel, without having a single line. Joe O’Loughlin suffers from Parkinson’s Disease; it is largely at fault for the changes that lead to his marital problems. It makes it difficult for him to continue his work, it makes it difficult for him to get through the day, in one case it gets him arrested, when an officer sees his jerky, disjointed movements and draws the wrong conclusion. It has clearly changed Joe’s outlook on life and as much as his wife loves him, I can see how it would be difficult for her.

Overall, I enjoyed the book, even if I wasn’t swept away by it. It’s a good mystery, interesting characters and a main character you can root for. Maybe it’s a good thing I don’t have teenage kids, because I found the teenagers in the book the most difficult to deal with, even as a reader.

One small note of warning: as I mentioned in an earlier post, there is one small instance of rather extreme animal cruelty in this book. I struggled over mentioning it, but I think many readers will find it disturbing. It is moderately graphic, and if that bothers you, I suggest skipping it. It has a definite place in the storyline, but you will see it coming, I think. Simply turn a couple of pages and go on; the disturbing details do not come up again after that point.

My copy of Bleed for Me

2 comments for “Review: Bleed for Me by Michael Robotham”