Guest Post: David Leroy, author of The Siren of Paris

Today, I’ve got a re-scheduled guest post. The post got to me a little late and I was traveling — no way to post it, even from Business Class. Still, I wanted to make sure you got a chance to check this out… 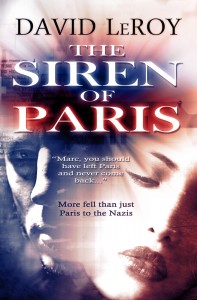 The Spell’s Against The Siren
By David LeRoy, author of  The Siren of Paris

I am not an author originally by training.  My educational background is in Philosophy and Religion, which is slightly less practical than being an English major. The practical side of my personality is that I am an artist, so you know, of course, that a character like me has a day job. One of the great advantages of self-publishing, or being an “indie” author is that I am allowed to take risks which a publisher would likely never dare to entertain.  Case in point is the opening to The Siren of Paris.  Modern novels are influenced by the “thriller” genre, yet in the opening of this book I take a massive risk with the reader.

I open the story with a priest holding a staff with a clock, mourners at a funeral, the diseased, and hoards upon hoards of gathering ghosts.  This composition may seem arbitrary and disorganized, but actually nothing is left to chance, including the content of the prayers.  This entire opening is inspired by one of the oldest known books to man.  For a moment, I want elaborate upon these prayers.

“May the Lord be with you.”  In the context of a church, this would be in an invitation to prayer.  In the context of this story, it is both an omen and a seal of protection.  It is the very first sentence of this book due to the content of the story.

“O God, we pray you lead us to truth, deliver us all from violence, battle, and murder, and from dying suddenly and unprepared,” This prayer is chosen because all of these unfortunate things take place in the historical record of the lives of my characters.

“O God, we pray for those who suffer in silence with guilt, and for those who suffer with shame, regret, and remorse.”  This prayer is chosen not only for the characters of the book, but any reader who has experienced the horrors of war or the guilt of surviving a disaster.

“O God, our time is in your hands, and we pray that you look upon us with favor as we, your servants, begin another year of life.”  This prayer is chosen because many of the characters in this book will not survive.

“O God, whose glory fills the whole of creation: Preserve and protect those who travel from every danger and bring them in safety to their journeys’ end.”  This prayer is specifically chosen for the victims of the Lancastria who died.  It is the wish and hope of anyone who travels to reach the destination, and I extend this wish now beyond the grave.

“O God, we pray for those who have died. May your love and light keep them eternally yours in peace and life without end,” This prayer is chosen for the 62 to 79 million men, women and children who died in World War II, the worst war in all of history.

“O God, the Father of all, who commanded us to love our enemies: Lead us both from hatred and revenge and, in your good time, enable us all, who are known unto you, to stand before you in eternal peace,” This prayer is chosen because it is the core spiritual problem of Marc, the protagonist of this story.  It is also the challenge of any survivor of a war as horrible and personal as World War II had become. It is a prayer, and hope, that healing of human relationships destroyed by war may one day become real.

“May the Lord be with you,” And this phrase is now repeated because you, as the reader, is upon a threshold.  The wish now seals the prayers of protection as you journey through the rest of this book.  As an author, while you were watching ghosts surround the scene and Marc cave under the burden of his own life, I have cast a spell of protection within these prayers, because I know what awaits you in the pages of this story.  I simply could not start this story like a typical thriller.

If you mention the name Titanic, everyone knows the story.  If you mention the name Lancastria, few outside of survivors and victims of this sinking know its name. Yet, this is the single largest British marine disaster of all time.  During the war, it was hidden, and since then, it has largely been ignored. There is some evidence that suggests that the files are even sealed for 100 years.  This is why I have called out every single graveyard in France that contained these souls, because they deserved to be named. I know in life the end was tragic for these souls, but in the context of this story, I bring them together and place them in the context of this war, for the purpose of their final transition to healing, release, and resting in peace.  From this perspective, the entire book operates as a magical spell to achieve that which in this world has not taken place.

In order to compose this very unique opening, I drew upon The Egyptian Book of the Dead.  Just like Ani, who holds the hands of a demi god spirit who guides him into the underworld of life after death, under the protection of magic spells, Marc Tolbert will be guiding you into the underworld of this war, under the protection of these prayers. The Siren of Paris tells stories of this war that people wish they had never known, and that, my dear reader, is why the first line is “May the Lord be with you.”

Review: The Meaning of Night by Michael Cox
New books!

2 comments for “Guest Post: David Leroy, author of The Siren of Paris”