Review: Buried on Avenue B by Peter de Jonge 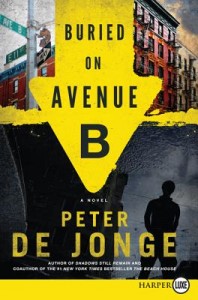 I wanted to read Buried on Avenue B

as soon as I read the premise:

When a home health attendant, Paulette Williamson, appears at Homicide South in Manhattan, she’s introduced to the NYPD’s Detective Darlene O’Hara and skeptically reports the confession of a senior citizen struggling with Alzheimer’s. Gus Henderson, a former junkie and petty criminal, claims he murdered and buried his former partner-in-crime in a park off Avenue B more than a decade ago, a lowlife who fell off the grid and hasn’t been seen since. The city agrees to excavate the alleged scene of the crime, and the police find a body—just not the one they were looking for. The cops unearth the skeleton of a ten-year-old boy, neatly dressed and buried ceremoniously with a comic book, a CD, some pot, and booze.

There has to be a great story there! And it turns out, there is. Darlene O’Hara is a great character. She’s got so much spunk and such an interesting life! I love the way she jumps into promoting her son’s band, the way she takes off on a Florida road trip with a tattooed lesbian detective in a hot car and the logical leaps she makes are pretty amazing. She’s a fun character and definitely one that will keep me reading the series.

The story was a little far-fetched, but that didn’t stop me from really enjoying it. This is the sort of mystery where nothing comes easily, and answers have to be ferreted out. Darlene’s ability to think her way around a problem and come at it from all sides really serves her well. She talked her chief into investigating this little mystery because it seemed like a slam-dunk; now, she has to solve it. Or else.

I also want to recommend an earlier book by Peter de Jonge that I read, Shadows Still Remain. I was sure that I reviewed this, but apparently not. Gonna have to correct that soon.

My copy of Buried on Avenue B was an Advanced Reader Copy, provided free of charge.

A new book and a new project
Saturday Snapshot!