Review: Something Red by Douglas Nocholas 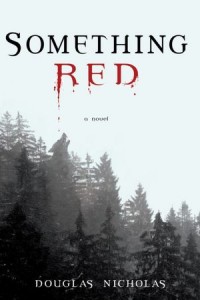 Sometimes a book tells you things about the author. Douglas Nicholas is an award-winning poet, and some of that poetry seeps into his novel, Something Red

. There is a certain lyrical quality to it that I appreciated, and I found that quite interesting, mixed as it was with a tale of murder and mayhem.

The story is told through the eyes of Hob (Robert), a 13-year-old orphan apprenticed to Molly (Maeve). a musical troupe crossing the Pennine Mountains of Northern England during a particularly brutal winter. Although the stop at many of their usual haunts, visiting old friends, there is clearly something lethal along the trail. There is an ominous presence in the forest and there are many who will not survive the journey. It may be that only Molly, her granddaughter, Nemain,  her lover, Jack, and young Hob will be able to save them all.

There is a bit of Irish mysticism in the story, and much about the past and future is told in hints and riddles. I had to work a bit on the language, as many of the words are obscure or regional. (Check out my Wondrous Words post on January 9, January 16 and January 23.) Maeve and Nemain have powers and there is something about Jack, something hinted at in the stories about his time on the Crusades and the horrible wounds he suffered. Hob, an orphan, was plucked from a small village where he had been cared for by the village priest; Maeve clearly saw something in him, and as Hob begins the transition to manhood, he comes into his own in this story.

I really enjoyed Something Red. I enjoyed the interactions among the troupe members and the story of life on the road, its hardships and friendships, was very interesting to me. What would it have been like to live on the road, performing for noblemen, trading your healing skills for food shelter? It’s a life modern people cannot imagine. It’s a suspenseful story, as you worry about the creature clearly stalking the travelers. Hob makes an excellent narrator — even though he spends his days walking along the trail, leading their ox, just trying to keep warm, he never seems to feel sorry for himself. Instead, he is filled with the wonder of a boy discovering life on the road, making friends, and seeing strange and glorious sights. He has Molly and Jack — and possibly Nemain — to protect him, but he does his part as well. His story kept me turning pages, racing towards the final confrontation.

My copy of Something Red