I’ve got 2 terrific new books to tell you about this week. The first book started quite a debate on my online forum, and the second is a new perspective on an interesting bit of history.

First, the scandalous title: Man in the Empty Suit

by Sean Ferrell. After reading the synopsis, there was no way I was passing this one up: 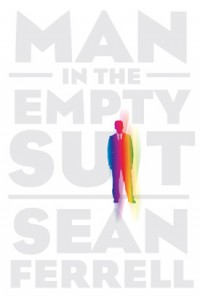 Say you’re a time traveler and you’ve already toured the entirety of human history. After a while, the outside world might lose a little of its luster. That’s why this time traveler celebrates his birthday partying with himself. Every year, he travels to an abandoned hotel in New York City in 2071, the hundredth anniversary of his birth, and drinks twelve-year-old Scotch (lots of it) with all the other versions of who he has been and who he will be. Sure, the party is the same year after year, but at least it’s one party where he can really, well, be himself.

The year he turns 39, though, the party takes a stressful turn for the worse. Before he even makes it into the grand ballroom for a drink he encounters the body of his forty-year-old self, dead of a gunshot wound to the head. As the older versions of himself at the party point out, the onus is on him to figure out what went wrong–he has one year to stop himself from being murdered, or they’re all goners. As he follows clues that he may or may not have willingly left for himself, he discovers rampant paranoia and suspicion among his younger selves, and a frightening conspiracy among the Elders. Most complicated of all is a haunting woman possibly named Lily who turns up at the party this year, the first person besides himself he’s ever seen at the party. For the first time, he has something to lose. Here’s hoping he can save some version of his own life.

Now, at least one person on my favorite forum said, basically, “they are doing time travel all wrong!” but I disagree. And even if they were, I would still want to read this. It’s one of those books that makes you want to move it directly to the top of the pile…and I just might do that.

Next, is Lady at the O.K. Corral: The True Story of Josephine Marcus Earp

and I can’t wait to read this one! Wyatt Earp is an iconic Wild West figure and I love books with an interesting perspective on history. 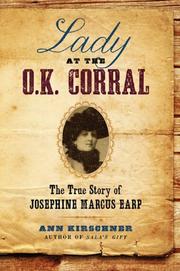 How did this aspiring actress and dancer—a flamboyant, curvaceous Jewish girl with a persistent New York accent—land in Tombstone, Arizona, and steal the heart of Wyatt Earp? What inspired five decades of adventure-seeking that led from the Arizona Territory to Alaska to Hollywood? And what sustained her lifelong partnership with a man of uncommon charisma and complex heroism?

How can you not want to read about her!

Be sure to keep checking back for reviews, new words, new books, guest posts and other commentary. There is always something new and book-related for you here!

Review: Something Red by Douglas Nocholas
Guest Post: Mike Martin, author of The Walker on the Cape