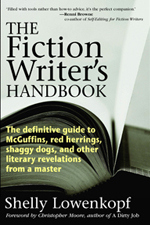 Today, I’ve got a special guest post from Shelly Lowenkopf, author of The Fiction Writer’s Handbook

. Shelly has a bit to say about one of the most common mistakes for new writers: the Reader Feeder. That’s a new one for me – how about you?

The Dysfunctional World of the Reader Feeder

Much of storytelling has to do with imparting dramatic information to the reader.  Imagine a character named Laird, leveling a gun at Fred’s head, snapping off the safety on the gun, then saying:  “Last chance, Fred.  Tell me where the money is.”  Then Laird licks his lips.

You don’t need to be told Fred’s in trouble.  You don’t need to slip in some interior monologue saying in effect, “Fred could see that Laird meant business.”  Fred has already seen what we’ve seen.  Laird, licking his lips.  He But you do it anyway–just to make sure the reader gets the seriousness of Laird’s intent.  And while you’re at it, hey, why not throw in an adverb to make sure there’s no doubt.  “Last chance,” Laird said menacingly.  “Tell me where the money is.”

Welcome to the dysfunctional world of the Reader Feeder, home of one of the most common mistakes the emerging writer makes, and makes again, to cover his tracks.  A few of these in your manuscript are sure to win it an all-expenses-paid trip to the rejection heap.

I’ve detailed in The Fiction Writers’ Handbook what the Reader Feeder is–the lazy writer’s way of presenting information that should become apparent to the reader through the action, not the stage directions.

Sometimes, an inventive writer gets the notion to use dialogue to impart the desired information, doing so in the mistaken belief that putting the Reader Feeder in quotes is, after all, showing, rather than telling.

“Hey, Fred, how’s your wife, Vanessa, these days, and my niece and nephew, respectively, Mary and John?”

Not a promising start.  You may know brothers-in-law in real life who talk that way, but when they do so in fiction, a noticeable strain comes over the narrative, on the order of Wal-Mart customers hitting the doors on a Black Friday.  The strain becomes even more pronounced with Fred’s response, “As you know, Laird, tomorrow is Vanessa’s birthday and we were hoping you’d join us for a small, intimate, family celebration.”

A potential key here is that leaden phrase, “As you know…” Telling a character what the character already knows is, at the least, a time for the reader to sigh with impatience, bordering on a decision to set the book or story down for good.  The simple expedient of switching “How many times do I have to tell you..?” at the least turns the conversation back to dialogue, with its confrontational insistence on reestablishing a dramatic fact that has play in the story.

Do not tell the reader what the reader already knows, and if you feel the necessity to do so, at least do it in such a way that will cause the reader to expect consequences that will alter the texture of the narrative.

Readers wish to observe their favorite characters as though eavesdropping on them, being an unseen observer to the ongoing drama.  Characters, for their part, do not have the luxury of explaining their circumstances or laying bare past relationships and unhappy childhood to complete strangers.

Sometimes it is a disservice to bludgeon the emerging writer too hard with the “Show–don’t tell” observation.  Some minor things can be told, leaving important things to be shown.  But when they are force-fed or force-shown–“I couldn’t help noticing you wear your watch on your right hand.”  “Most left-handed persons do, you know.”–the result is that most bloated feeling of all, having been exposed to the Reader Feeder.

From time to time, you may catch an egregious Reader Feeder in a book you’re otherwise enjoying, but the real pros, writers working in all the genera, have taught themselves the basic rule of fiction: Story is not described for the reader, it is evoked within the reader’s imagination.###

For more on Shelly Lowenkopf and The Fiction Writer’s Handbook…