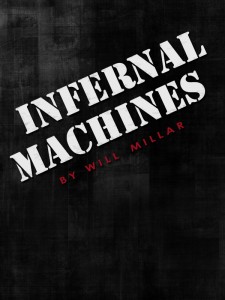 It’s Friday and that means that, as usual, I’m letting someone else do the work for me! Today, I’ve got a guest post from Will Milar, author of Infernal Machines (A Vintage Horror Novel)

. With horror novels, I am always interested in why someone chooses to write horror, what drew them to the genre and made them decide that was the best way to tell their story. That’s what I asked Will Milar, and let’s see what he has to say…

Title: What Drew Author Will Millar to the Blood-Soaked Halls of Horror

Thanks for having me here today, and for allowing the opportunity to promote my latest book, Infernal Machines.

You pose some interesting questions, and I imagine that the answers are different for anybody who writes Horror. I think you have to ask yourself what it is you’re ultimately trying to say. I believe that at the heart of any good work of fiction, the writer is trying to tell the truth even when he’s lying like crazy. So, if you’re writing a story about murderers and monsters, there’s going to be some bloodshed. I don’t revel in the gore, but I don’t shy away from it, either.

How do you know when something is too much?

I feel like something becomes too much only when the gory details begin to bog the plot down. If the violence gets too gratuitous, it can sometimes throw off the timing of the story. It doesn’t matter if you’re writing about monsters or space travel or Victorian Era architecture, there’s always a risk of being over-descriptive, and I always try to err on the “less is more” side of the fence.

Also, when it comes to scaring folks, some of the most effective tricks come from pulling away from what’s going on, and letting the reader’s imagination fill in the worst of the details. That’s a stylistic decision more than anything else, and there are occasions where I break that rule and go into hyper-graphic mode. Again, it has to fit the story’s need, though.

Are there lines you just won’t cross?

This is kind of a tough question to answer honestly. There are lines that I haven’t had to cross yet, for which I’m grateful. Again, I believe in “truth-telling” in fiction more than anything. There are certain themes I’ve avoided introducing so far, but who’s to say what will happen in the future?

I’d like to think that if I have to handle some subject matter that borders on being “icky” then I’ll do it in a way that rings true, and won’t come off as weak writing. If some people regard what I write as being lurid or gratuitous, then I guess that’s the risk any Horror writer faces.

Do you sometimes write something and think, “I can’t do that!” and then decide that you can?

This happens to me all the time. I’m currently in the rough stages of my next novel, and I constantly have to remind myself to “Turn off the filter,” so to speak. There’s a process of refinement as you go through each step, and in the earlier phases I try to throw just about every crazy idea that pops into my brain onto the page, thinking all the while that there’s no way it will make it into the final draft. And yet, sometimes the ones that seem totally messed up, when taken into context with the rest of the story, just seem to work.

With Infernal Machines I ran into this a lot in the second half of the story. It takes a couple of very hard turns, that when I started writing it, I had no idea were going to happen. Again, it’s all about telling the truth, though. Any writer will tell you, we don’t always get a say in how things play out. In a way, we’re kind of like journalists reporting on events that play out in our heads. Something else is putting the stuff there, and I don’t think anybody really knows what it is.

Anyway, thanks a lot for having me here today. I hope you and your readers enjoy Infernal Machines

Will Millar was raised in Commack, a quiet and unassuming town close to the northern shore of Long Island. As a kid, his primary passions were horror and hell-raising. As he tended to cultivate the latter to a greater extent than the former, by the time he was 17 years old, the whole town decided they’d had quite enough of his antics, and would he please just take his act on the road, thank you very much.

He enlisted in the Marine Corps, where his penchant for fire, explosions and general mayhem were tolerated, if not somewhat approved. At this point, Will also discovered the writers of the Beat Generation and began to write more consistently, submitting his less profane poems to underground ‘zines and belting out the more terrible stuff to unsuspecting audiences at various open mike nights throughout the Pacific Northwest.

Throughout the last 15 years, Will has worked as a writer in various mediums, though horror continues to remain his favorite. He sometimes contributes articles to Cracked.com, and his short stories are available in several different anthologies. Infernal Machines is his first novel.

At the present, Will lives in Phoenix AZ. He is a father of four, owns two dogs and has a wonderfully understanding girlfriend, all of whom somehow manage to put up with all of his crap.

Connect with Will Millar