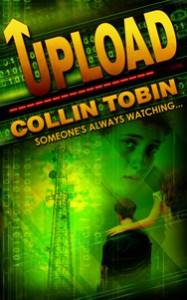 I get a lot of review requests – A LOT. Most of them, I have to decline just because I can’t spend all my time reading, even if I wanted to. But sometimes, even when I have to turn a request for a review, I find that I want to tell people about the book anyway. That’s the case with Upload

by Collin Tobin — the book sounded really interesting, and a guest post is a great way to spread the word, right? So check out Collin’s guest post on writing, then click through to read a little synopsis of the story.

Family Guy has a scathing bit about writers that write outside of the home, specifically in cafes:

Writer 1: Hey, getting some writing done there, buddy?

Writer 2: Yeah! Setting up in public (cracks knuckles) so everyone can watch me type my big

Writer 1: Me too. All real writers need to be seen writing. Otherwise, what’s the point, right?

Writer 2: You should totally write that down!

Writer 1: Okay! Will you watch me?

Watching this, I at once laughed, but then also thought, Jesus, is that what I’m doing? Am I, at some subconscious level, writing outside of my house so I can look smart, learned, and authorial? I dismiss the thought immediately of course. But that still doesn’t exactly answer why I wrote about 90% of my first novel, Upload, outside of the home. Who would do such thing? There are so many inconveniences to contend with. Any of the bookstores or cafés near me are at least a fifteen minute drive each way. Also, by leaving the house, I’m increasing my risk of forgetting something crucial like my laptop power adapter or headphones. Then there are the café workers, who tend to converse with each other like construction workers shouting over a bulldozer. The coffee is about 1,000 times more expensive than at home. I run the risk of not finding a seat by a power outlet. I’m exposing myself to a chance sighting by an especially chatty friend or acquaintance. Worst of all, I might get distracted by analyzing the curious groups of people that gather around me (suspected secret rendezvous, break-ups, job interviews, and worst of all, that one guy that incessantly yaps on his cellphone at his “office”, four tables pulled together). I might even get the worst seat of all, directly behind the sandwich press, which is the equivalent of deep-throating a tailpipe. Come to think of it, I think I might have the first diagnosed case of Panini-lung.

So why don’t I stay home?

There are, of course, things that push me out of the house. For instance, the cat litter sits three feet from the desk. Close enough for me and the cat to exchange uncomfortably intimate, glazed stares. And the space itself isn’t great. The small study becomes stuffy—the air seemingly heavy with the CO2-like byproduct of concentration. You can just walk into the small room and immediately detect someone’s been thinking hard in there, just as one can enter a bedroom and know, despite being empty, that someone had been sleeping there minutes before. I also don’t like being so mentally absent while home—for my family’s sake. I’m physically there, but barely, as if plugged into life support. Can he even hear me? Not a pretty sight. What’s worse, through pictures and video, I’ve seen my profile while concentrating. I look like the most uncomprehending ape you’ve even seen. Hell, even I would be annoyed at having to look at me while writing, deep in thought.

Rarely, but on some days, writing at home can be an even greater distraction than four-table-Phil working out of his Starbuck’s sponsored data center. But still, these are not great reasons for why I tend to write in “public”. Although my public writing is not as public as say, Silvia Hartman, who is supposedly writing her entire novel live on Google docs for all the world to see. Why wouldn’t I want the general quiet of home, or to lock myself in the attic as authors have been known to do? I could write in tomb-like silence, in total concentration, working as quietly as a lepidopterist pinning butterflies.

From what I can gather, I write outside my home for the following reasons. I like physically inserting myself into the ever-revolving carousel of the same people, conversations, and life that I’m writing about. At home, I have only two choices for stimulation: return the blank stare of the wall in front of me, or turn my chair to study my neighbor’s house through the window. But away, in any café, I can look up from my writing fugue to an array of characters parading themselves before me, unsuspecting actors in an impromptu audition. I can steal the way that woman keeps refolding the same lock of hair behind her ear as she reads, I can lift from life the way that guy is openly discussing his divorce over his Bluetooth headset while staring directly into the eyes of strangers, or I can borrow the stumbling gait of the child chasing his mother out on the sidewalk. Each time I look up, focus-fuzzy, I’m surprised where I am, and every time, pleased at what I see.

Is that enough reason? I don’t know.

There’s one bookstore I go to near a Wal-Mart with a massive parking lot. I like taking breaks and looking out the window. It’s technically an ocean view—of cars. And if you look over there, you can see a small eddy of seagulls that have flown in from the coast to scour the nearby McDonald’s for spare fries. I rest my elbow on the table and watch the birds, circling over the dumpster, and notice that even my table rocks like a boat, side to side, upon its uneven legs. And the sky outside is clear, a sailor’s delight, a welcomed vision. I draw from these impressions, and use them to scrub away the storm clouds broiling above my own head, charged with indecision. I can do this.

For more on Collin, check him out here:

.
Upload:
Someone’s always watching.
Jay Brooks’s life is in chaos. His mother’s sudden death has unhinged his father, making Jay a stranger in his own home. He seeks solace by spending his spare time with his best friend, Bennie, but matters are further complicated by his crush on Chloe, Bennie’s older sister.
A wheelchair-bound hacker, Bennie Welch practically lives in his basement computer lab. Longing to make genuine connections to the outside world, he secretly films people’s precious memories for later sale and surfs the crowds at rave parties, despite the danger to his frail body.
One night, Jay’s hobby of Wi-Fi hotspot hunting turns serious when he unwittingly blunders into the scene of a crime and downloads a mysterious transmission. When Jay brings Bennie the contents of the transfer, Bennie embraces the opportunity to use his skills to investigate.
As Jay and Bennie dig deeper into the world of electronic secrets, they find that the simple video has far-reaching implications that not only threaten their lives, but society as they know it. Tracing the mysterious coalition responsible leads them on an inexorable journey that will change them forever.