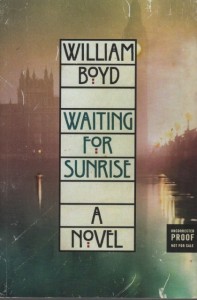 by William Boyd is the story of Lysander Rief, a London stage actor who has come to Vienna in search of a cure for his sexual problems. He gets his cure, although not quite in the way he planned.

Rief meets a crazed woman in his psychiatrist’s office, a Miss Hettie Bell, and from that moment on, Rief doesn’t miss an opportunity to make a bad decision. He falls into a passionate affair with the married Hettie, who later accuses him of rape. While being held under house arrest at the British Embassy, he becomes convinced that the case must not go to trial. Two embassy employees, Jack Fyfe-Miller and Alwyn Munro, help him escape Vienna and return to London…for a price, and Rief has no idea how high that price will be.

That’s the first part of the book and, for me, it was a slog. I was so frustrated with Rief making dumb decision after dumb decision! But I kept going and I’m glad I did. The later parts of the book are much more interesting, as Fyfe-Miller and Munro draw Rief into a complicated bit of espionage, trying to identify a traitor who is giving information to the Germans. This is where the story really gets interesting. Rief’s background as an actor is clearly helpful, as he assumes several different identities and disguises. Fyfe-Miller and Munro continue to turn up, and I began to wonder whether any of the prior events were really just coincidence.

An interesting thing happened, talking about this book with some friends. An online acquaintance, familiar with Boyd’s work, said he is “pretty good at bringing pathetic characters and their pathetic misfortunes to life.” So, apparently, Rief’s cluelessness was by design, not by accident. I don’t have much patience with watching a character being stupid over and over, but that’s me. It might not be a problem for other readers.

Overall, the book is very good. The writing about Vienna is beautiful, very atmospheric. The espionage story and Rief’s family interactions were far more interesting than his stay in Vienna, at least for me. The writing really rescues the story, and I would definitely be interested in reading more of Boyd’s work.

My copy of Waiting for Sunrise

1 comment for “Review: Waiting for Sunrise by William Boyd”