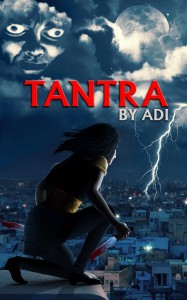 One of the most interesting things about sci-fi and fantasy novels is the idea of world building – creating a whole new universe for your characters. You need names and places and rules, rules for your characters to live by and you have to be able to stick to them. So much power! And so much responsibility.

Today, I’ve got a guest post from Adi, author of Tantra

, talking about world building. Now, you know I like to take it easy on Fridays and let the authors do the talking, so here we go…

The Art of World Building

When I decided to create a brand new world (or in the case of Tantra, a slightly modified version of the existing one), at first it seemed rather exciting. I was the de facto God. Sure, vampires could exist, and maybe pigs could fly, and people could transport themselves across continents with a single click.

But at some point I realized every single world, no matter how mundane or fantastic, needs to have its own laws of physics and rules. For fantasy authors, this involves extensive plotting and mapping, much of which never even shows up in the final book. Readers these days are quick to point out inconsistencies, and those inconsistencies can break down the entire illusion an author like me is trying to create.

To allow the reader to believe in a world, you must explain how it works, its limitations, and how your characters will interact with it. This is especially true of the hero. In classic superhero stories, the powers of the superhero are well defined. The antagonist only becomes truly interesting when he or she is able to circumvent those powers, or mitigate them. The reader believes the hero is in trouble only if he or she knows the hero’s limitations, and the resulting difficult choices.

When writing Tantra, a critical challenge was not only how to create a new world, but how to connect it seamlessly to a philosophy and religion that are several thousand years old. I had to answer questions like do vampires have souls? How are human beings connected by the threads of maya, karma and dharma? How would one summon an ancient weapon? How does sound integrate with action in a world of illusion?

As plot grew more complex, more questions came up. Tantra’s main character, the vampire hunter Anu, studies an ability called “the shift,” which can be learned by anyone. But then how old is the ability? How does it medically work? Why can’t someone learn it on their own? Some of these questions get answered in this book, while I intentionally left others for sequels or off-the-page author questions. This is another lesson for writers: you need to manage the information flow to the reader properly, thinking more about engagement, action, and plot, rather than giving a social studies lecture on your brave new world.

Another troublesome factor for writers comes in when thinking of tangential books and sequels. You often make choices about your world which work very well for the first book, but start to limit or even foil your vision for the follow-up novels. Television soap operas made this into a comical art: sure, we said twenty episodes ago that Jane’s sister is dead, but she’s not now. It was a conspiracy! She looks nothing like she used to? Oh, she had plastic surgery. And Greg? He touched some space alien stone, and now he can fly and move things with his mind.

Authors do not seem to have the same leeway. Even in the realm of fantasy, while we revel in freedom, the art of building a new world is in many ways a discipline.

Good authors maintain extensive notes. Literary giants like Tolkien even created their own maps to keep everything tracked and in good order. For Tantra, I started with in-depth character descriptions: what do they eat? What do they wear? How do they feel about the rules of the world around them? How much do they even know about it? What misconceptions do they have? Then I moved on to connecting my world’s underpinnings, sketching it all out on a giant glass pane with red markers to track concept movement. A particularly challenge was tracking memories and the resulting karma through multiple rebirths, vampire risings, and childhood trauma.

It was hard and, after a while, even a bit boring. I got into this gig wanting to express words, not make flow-charts, diagrams, and family trees. But now that the book is out and the readers are responding to it, I know the time investment was well worth it. Because sometimes all it takes is a well-placed question by a fan to bring your wonderfully constructed world crashing down, not only for you and the fan, but for everyone.

is the first uniquely Indian approach to the popular vampire genre. The novel introduces Anu—a leather-wearing, no-nonsense guardian who moves from New York City to New Delhi in order to chase the unknown enemies who murdered her boyfriend. But before she can seek her vengeance, she must come to terms with the complex  arrangements between her fellow guardians and the myriad paranormal forces in the ancient city. When children start disappearing, Anu discovers a local guru trying to master forces darker than anything she’s faced in the West. All of Delhi is in danger, especially the sexy stranger who sets Anu’s pulse racing. To prepare for the coming battle, Anu must dive deep into her mental powers. This time, her most powerful weapon will come from her mind, not her weapons belt.

Tantra is the first novel written by Adi, a successful entrepreneur and researcher who splits his time between New Delhi, Zurich, and Dubai.

Find out more about Tantra: