WordPress and I are not getting along lately. I have had several posts just disappear into the ether. Others, like this one, are scheduled to post and just never appear. My apologies to the good folks at Tor/Forge for missing the review date. 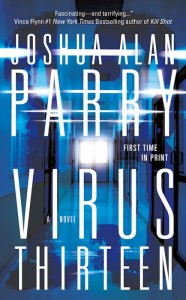 by Joshua Alan Parry presents a scary vision of the future. Amazing medical advances have cured cancer and many other health problems, but they’ve left a frightening bureaucracy behind. The Department of  Homeland Health Care tackles smokers on the street and sends them to rehab. Patients who are obese, hypertensive, diabetic or depressed are corralled into “health retreats” that are little more than fitness boot camps:

“Now, the watch you just put on is actually a calorie counter. It has a computer chip in it, much like the identity chip in your wrist, that will help us monitor how many calories you’re burning during your workouts. How we work here is simple. You have a meal with four hundred calories coming up, but in order to receive that meal, you must burn at least six hundred calories. If, by the end of this session, you haven’t reached that goal goal, you will have to wait for the next meal.”

Perfectly in line with a lot of current thinking – that thin equals healthy, even though the facts don’t always support that idea.

There’s an undercurrent here. GeneFirm, the biotech company that cured cancer, is working on a cure for the flu epidemic that is sweeping across the country, but there is evidence they are not telling the truth. One of the senior researchers may have cancer…even though cancer has been cured. The firm is in lock-down, people are trapped inside…what is really going on?

There is plenty of suspense here and I think there’s a enough drama to make a pretty good movie. There are plenty of plotlines to keep you interested. There are the Logans – researchers at GeneFirm who may be at the center of something that will change the world. You’ve got MacDonald and Marnoy, our Homeland Health cops. Their job is to round up the unhealthy, but one of them may not be what he appears to be. They drag Pat and Modest to the health retreat, and they may end up on an adventure of their own. And on all sides, there is the virus, burning through the population. How is GeneFirm involved?

The problem for me with Virus Thirteen was that there is a plot hole here that was so obvious that it jolted me right out of the story. As soon as it came up (and I won’t share my thoughts, as it might not be as apparent to others), I had an immediate, incredulous reaction, and that made it hard to sink back into the story. I can suspend my disbelief with the best of them, but sometimes you just shake your head and think, you could have done better. However, even with the plot problems, this is a good, quick read with lots of potential. The health cops infuriated me, but I could almost see it, the militant attitudes that some people have, passing laws about soda pop and trans fats – maybe they aren’t that far down the road.

My copy of Virus Thirteen