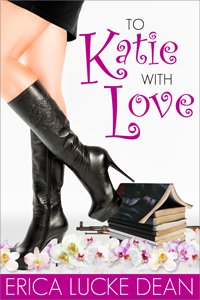 It’s Friday, so I’ve got company here on the Shelves. Today, I’ve got a guest post from Erica Lucke Dean, author of To Katie with Love, about Chick Lit. I don’t read a lot of Chick Lit, but I am a big fan of people reading what they like and I am not one to put down a genre just because I don’t read it. I too often hear people put down chick lit and I like to ask chick lit authors if they get the respect they deserve…Even better, we’ve got a giveaway and other goodies, so be sure to read through to the end!

My name is Erica, and I write chick lit.

My name is Erica, and I write chick lit.

It sounds like I’m introducing myself at a secret group meeting of similar genre writers, sequestered away in dark basements where we sip on full-caf vanilla lattes and chain-scarf chocolate bonbons while we trade stories about our cats, and console each other about our sad, unfulfilled lives, doesn’t it?

Okay, so maybe the part about the chocolate is true. I do dig the chocolate. But the rest? Pffft! Are you kidding me?

I don’t skulk around in dark hoodies, hiding my face like some sort of fugitive of fiction. Not me! I’m dressed in pink from head to toe, dancing around with a bouquet of fresh daisies clutched to my chest, ready for the “he loves me, he loves me not,” moment to present itself. And let’s face it… of course, he loves me.

And why wouldn’t he? My life has a soundtrack. It’s not unusual to find me skipping from room to room to the perky beat, as bubble hearts float up from my head. I’m not kidding! Even as I type, I’m salivating at the perfect man, cooking me breakfast—to be served in bed—while flashing his impossibly perfect abs for me to gaze at while I eat.

So, maybe that’s not true either. I’m just a regular chick who likes to write about stuff that will make people laugh, maybe make a few hearts go pitter patter along the way, and then leave you with an all-around good feeling at the end. And really, what’s wrong with that? I’m no Stephen King, no Jackie Collins, no JK Rowling, but I’m perfectly happy to be me… a chick lit writer.

When did people get so judgmental about genres anyway? Why does chick lit deserve less respect than say, drama or mystery? It’s that whole “commercial” aspect isn’t it? The minute you tack on commercial before the word fiction, you run into the whole, “You’re not a serious writer. You just wrote that because people will buy it,” crap.

And to my detractors, yes, I wrote it because people will buy it. Isn’t that the point? What good does it do to write a book if no one wants to buy it? But that’s certainly not the only reason. I have characters in my head screaming at me to get their stories out, and they could care less if anyone buys it. They just want someone to read it.

And sure, I could have easily written a sweeping epic of family drama that critics would hail as the next Gatsby, but where’s the fun in that? Not to knock Fitzgerald, he totally rocked, but sweeping epics are not my thing. I’m writing for the women of the world who simply want a fun romp to bring a smile to their lips. Life is meant to be laughed at—enjoyed—and chick lit does that. So as long as someone still wants to read it, I’ll keep writing. With… um…my little stash of  chocolate bonbons at my side. Because, yeah…

2 comments for “Guest Post: Erica Lucke Dean, author of To Katie with Love”