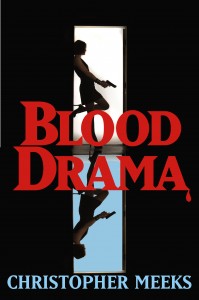 Ian Nash is having a remarkably bad day. He has been kicked out of his PhD program, which means no degree, no job, no income. As if that isn’t bad enough, when he stops at a local coffee shop to drown his sorrows (and maybe pick up a job application), he’s taken hostage by bank robbers. What else could go wrong?

Just about everything, in Blood Drama by Christopher Meeks. Ian makes a series of bad decisions: he’s smart enough to use his theater training to glean small details about his captors, but he can’t resist showing off what he’s learned, putting himself in grave danger. At least he’s smart enough to make his escape when the opportunity presents itself…but not quite smart enough to stay out of trouble.  Now he’s on the run with a vicious bank trigger man hot on his heels.

FBI Special Agent Aleece Medina wants to bring down this particular bank robber — The Busty Bandit — and she’s willing to fight dirty to stay on the case. Nash may be able to help, if she can keep him alive long enough.

I wasn’t sure what this book was trying to be. It wasn’t gritty enough to be a crime drama. It wasn’t wacky enough to be a comedy. And while Nash and Medina are drawn to each other, there was never enough heat for a romance. There are some funny passages, but I could never get caught up in the story.

Nash makes rash decisions that made me want to throttle him, while Medina bounces back and forth between fiercely professional and ridiculously smitten. I think Medina’s behavior bothered me more than Nash’s, precisely because she is supposed to be a professional. It’s clear that Nash can help in the investigation, but she should be able to find a way for him to help without endangering his life and without anyone else ending up dead. Instead, she takes him on a road trip, gets drunk, and flirts with him. Although I enjoyed parts of the story, I couldn’t like either main character enough to really be drawn in.

My copy of Blood Drama was an Advanced Reader Copy, provided free of charge.