I think I have enough new books to post for miles, so I’ll share them with you a few at a time. I have a towering stack here next to the computer, and three more big, fat envelopes that came in while I was gone last week. Heavenly! 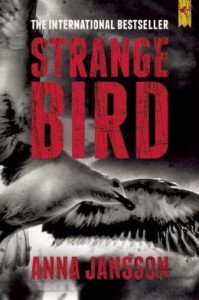 As the bird flu pandemic reaches Gotland Island, panic spreads among the inhabitants who are frantic for an elusive cure. In the desperation that rises, the hunt for scapegoats begins, and extremist and anti-immigrant groups gain ground. Meanwhile, nurse Sandra Hägg makes a gruesome discovery at the health clinic where she works—a discovery that will cost her life. Soon Detective Inspector Maria Wern is assigned to solve the murder. Strange Bird, the first novel in the Maria Wern series in English, showcases Anna Jansson’s mastery of both hair-raising crimes and the inner lives of her beloved characters.

You know how I love a good apocalypse! I am looking forward to finishing this one.

Next, a new Charles Todd. I received my first Charles Todd novel as an Advance Reader Copy and have tried to snap up every one since. Next up is A Question of Honor 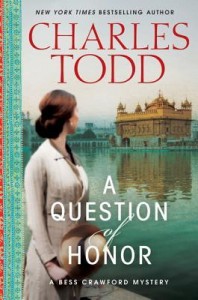 Bess Crawford enjoyed a wondrous childhood in India, where her father, a colonel in the British army, was stationed on the Northwest Frontier. But an unforgettable incident darkened that happy time. In 1908, Colonel Crawford’s regiment discovered it had a murderer in its ranks, an officer who killed five people in India and England yet was never brought to trial. In the eyes of many of these soldiers, men defined by honor and duty, the crime was a stain on the regiment’s reputation, and on the good name of Bess’ father, the Colonel Sahib, who had trained the killer. A decade later, tending to the wounded on the battlefields of France during World War I, Bess learns from a dying Indian sergeant that the supposed murderer, Lieutenant Wade, is alive-and serving at the Front. Bess cannot believe the shocking news. According to reliable reports, Wade’s body had been seen deep in the Khyber Pass, where he died trying to reach Afghanistan. Soon, though, her mind is racing. How did he escape from India? What drove a good man to murder in cold blood? Curious to find answers, she uses her leave to investigate. In the village where the first three killings took place, she discovers that locals are certain that the British soldier was innocent. Yet the present owner of the house that was the scene of the crime believes otherwise, and is convinced that Bess’ father helped Wade flee. To settle the matter once and for all, Bess sets out to find Wade and let the courts decide. But when she stumbles on the horrific truth, something that even the famous writer Rudyard Kipling had kept secret all his life, she is shaken to her very core. The facts will damn Wade even as they reveal a brutal reality, a reality that could have been her own fate.

And last, at least in this batch, Lost Girls: An Unsolved American Mystery

by Robert Kolker. True crime isn’t always a big favorite of mine, but this looked too good to pass up: 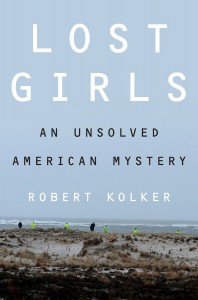 One late spring evening in 2010, Shannan Gilbert, after running through the oceanfront community of Oak Beach screaming for her life, went missing. No one who had heard of her disappearance thought much about what had happened to the twenty-four-year-old: she was a Craigslist prostitute who had been fleeing a scene—of what, no one could be sure. The Suffolk County Police, too, seemed to have paid little attention—until seven months later, when an unexpected discovery in a bramble alongside a nearby highway turned up four bodies, all evenly spaced, all wrapped in burlap. But none of them Shannan’s.

There was Maureen Brainard-Barnes, last seen at Penn Station in Manhattan three years earlier, and Melissa Barthelemy, last seen in the Bronx in 2009. There was Megan Waterman, last seen leaving a hotel in Hauppage, Long Island, just a month after Shannan’s disappearance in 2010, and Amber Lynn Costello, last seen leaving a house in West Babylon a few months later that same year. Like Shannan, all four women were petite and in their twenties, they all came from out of town to work as escorts, and they all advertised on Craigslist and its competitor, Backpage.

In a triumph of reporting—and in a riveting narrative—Robert Kolker presents the first detailed look at the shadow world of escorts in the Internet age, where making a living is easier than ever and the dangers remain all too real. He has talked exhaustively with the friends and family of each woman to reveal the three-dimensional truths about their lives, the struggling towns they came from, and the dreams they chased. And he has gained unique access to the Oak Beach neighborhood that has found itself the focus of national media scrutiny—where the police have flailed, the body count has risen, and the neighbors have begun pointing fingers at one another. There, in a remote community, out of sight of the beaches and marinas scattered along the South Shore barrier islands, the women’s stories come together in death and dark mystery.

The best part is, this is the tip of the iceberg. So many more great books to share with you! Check back next week for more.