by Lisa on August 2, 2013 in Book Review, Memoir/Biography, Nonfiction • 1 Comment 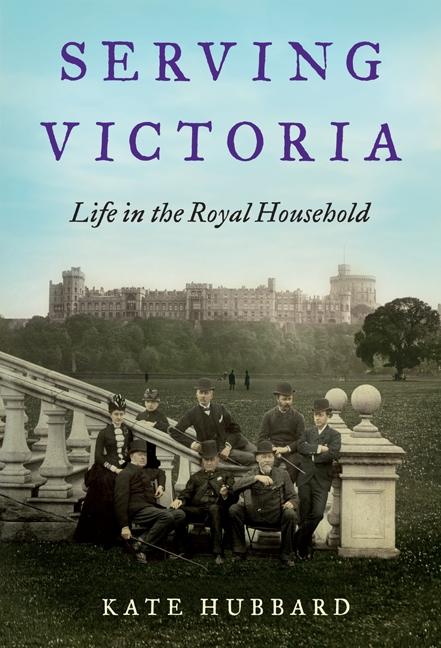 This is a book that delivered exactly what I was hoping for! Serving Victoria: Life in the Royal Household

is full of details about living at the palace with the Queen, her husband and children. I really learned a lot about life in the royal household – the sort of interesting little details that aren’t salacious enough for the Daily Mail.

Did you know that a Queen’s “ladies in waiting” were actually noblewomen, paid to hang out at the palace and be the Queen’s BFFs? I had always assumed that the ladies in waiting were servants, and in a way I suppose they were, but they were minor noblewomen who received a salary and worked on a rotating basis. They generally lived at the palace for a month at a time, joining the Queen for rides in the country, visits to other nobles, playing cards and attending concerts. This was not always as exciting as it sounds:

“There were visits to the theater too, by no means an unmixed pleasure for the lady-in-waiting, who had to juggle Her Majesty’s many different wraps, her bouquet and bag and opera glasses, without being provided with the comfort of a seat. In June 1850, Charlotte [Canning] stood for four and a half hours behind the Queen’s chair at a command performance of As You Like It…“

I really had no idea that the Queen had so much control over the lives of her court! She controlled when are where they ate dinner – right down to their seat at the table. She controlled whether they could take a walk, whether they could visit with their families, what colors the ladies were allowed to wear, even whether or not they could have a fire in their rooms. I am a freeze-baby; when everyone else is comfortable, I am chilly. I’ve gotten used to it and I dress accordingly — but what would it be like if you weren’t allowed to dress for your temperature?

The Queen firmly believed in the benefits of bracing temperatures, and in her palaces thermometers, set into ivory obelisks, sat on every mantelpiece to ensure the rooms remained healthily cool…After dinner, in the drawing room, jauntily upholstered in canary yellow and frequently no more than 40° Fahrenheit, the shoulders of the ladies turned quite blue.”

Can you imagine? Honestly, I shiver just thinking about it.

I’m not certain that it was intentional, but I definitely came away with a feeling that the Queen did not really connect with the people around her; that while she professed great love for them, she was completely insensitive to their basic comfort and happiness. Randall Davidson, Dean of Windsor late in the Queen’s life, said that she was “in many respects like a spoiled child, a nice child, but one who had not been properly handled or subjected to restraint and there is a good deal more difficulty in dealing with a spoilt child at the age of 60 or 70 than with a spoilt child of 6 or 7.” That was my impression in a nutshell, and while others talked about her “sound judgment,” I didn’t feel it in the text. She was not above using her influence to keep treasured courtiers from retiring, even when their health should have won them some respite, and separations from loved ones for months on end were a matter of course.

I did expect her to be more involved in the running of the country, but she seemed to prefer micro-managing the lives of her household – decreeing which windows could be opened and which must remain shut, who was allowed to ride which pony and the order in which her court could proceed into the dining room – all the while refusing to open Parliament or make public appearances because of her shattered nerves. Whether or not that is a fair impression, I really can’t say. I don’t have any innate respect for royalty that inclines me to give her the benefit of the doubt.

At the same time, she was prone to giggles, clearly had a crush on one of her Highland servants late in life, and played badminton in the hallways of the palace. That makes it difficult to be terribly hard on her.

The book occasionally gets bogged down in politics and the history and lineage of the court members. That’s not something that was of particular interest to me, although other readers might find it enlightening. I was really interested in all the little details of palace life – the huge entourages for trips abroad, the detailed arrangements for a simple dinner, the backstairs gossip and the infighting among the members of the court. Serving Victoria delivers plenty of that. I loved the way you not only got a feel for the character of Queen Victoria, but also for the personalities of her servants, through their letters and journals. They spoke their minds, at least in private, and that goes a long way toward giving us a true picture of the monarch.

This is a real gem for those who have an interest in the behind-the-scenes life of the royals. My copy of Serving Victoria: Life in the Royal Household