Okay, I expect the New Year to be full of New Books! First up, a little international intrigue with Rogue Warrior: Curse of the Infidel

by Richard Marcinko and Jim DeFelice: 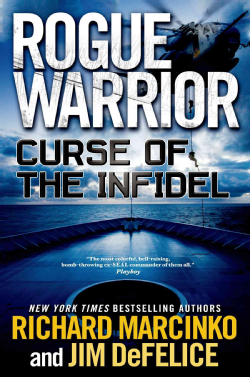 Hot on the trail of a bank official who is laundering money for an al Qaeda-sponsored terrorist cell, Rogue Warrior Richard Marcinko finds himself in the thick of a covert operation run by the CIA—a.k.a. the Christians in Action. Angry that their operation has been ruined, the CIA demands that Marcinko and his Red Cell International group work for them. He agrees, then gets into a situation so dire only SEAL Team Six can extricate him.

While grateful for help from the unit he helped establish, Marcinko realizes there’s a lot more going on than the CIA will admit—and when the investigation leads to a luxury liner loaded with explosives and contraband heading toward the United States, he recruits members from the originalSEAL Team Six to help. But will the old-timers and young bucks be enough to prevent disaster in a US port?

Review: The Serpent of Venice by Christopher Moore
Quotables