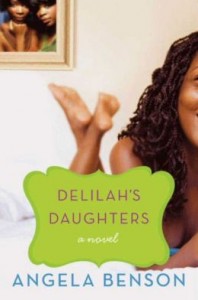 When I was a kid, my mom used to curl up under a lamp and read romances until bedtime. If work had been particularly bad that day, she’d head for her book right after supper. When I got a copy of Delilah’s Daughters, I followed my mom’s example and curled up on my side of the bed, turned the night table lamp on and read, and read. This book is that kind of read. I found it absorbing precisely because it didn’t take me too far from home; the relationships, conflicts and values were familiar enough to make me nod my head in recognition, and I think a lot of readers will do the same.

“Delilah’s Daughters” is a trio of singing sisters that has reached the finals of an “American Idol” –like t.v. show. They should win—but they don’t. (You know how this goes, right? The best acts always seem to come in second.) The television show has brought them exposure that will ultimately divide them. Their mother, Delilah wants them to continue in the group that their dead father founded and managed. No one part should be greater than the other, she insists. And there’s a recording contract with a small, local company that will let them do just that. But daughter Veronica has been offered a solo contract with a major recording studio. Veronica loves the spotlight—how can she refuse? And Alicia—well, she’s never liked the spotlight anyway, and the demise of the group leaves her free to pursue her dreams of becoming a songwriter. Meanwhile, Roxanne, a cruise ship singer who is technically the best singer of the group, is seeing a married man. And then, there’s mom and manager Delilah herself: she’s trying to hold the family together, but the secret she’s harbouring could potentially tear it apart for good.

The conflicts between the characters are familiar. Can loyalty to a family or group hold a person back? Is breaking free and getting the dream all it’s cracked up to be? How many of your core values are you ready to give up to pursue your dream? And what do you do when the mistakes of the past threaten to overwhelm the present? Values are a central part of the book, but there are no tub thumping homilies here. Instead, you get people who are just struggling to do the right thing. They’re human, and they make bad decisions. They fight. They get jealous. And, although there aren’t any sexually explicit scenes, sex exists. These are real women, after all.

Angela Benson’s work represents something of an alternative to some kinds of urban fiction. As another African American author pointed out, “not everybody’s into pimpin’, druggin’ and ‘hoin’.” This is about educated, reasonably successful but still ordinary folks that you don’t see on the news unless they’re anchoring it. But real folks have their own dramas—dramas that are all the more compelling because they are ones that everyone shares.

My copy of Delilah’s Daughters was an Advance Review Copy, provided free of charge.

For more on Angela Benson’s work, check out her website.