Review: The Abomination by Jonathan Holt 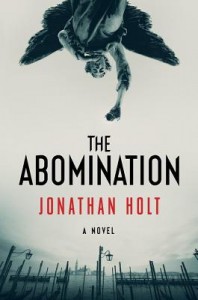 Everything is a trilogy these days! I’m serious – I cannot begin to tell you how many review copies come to me that are Book One is some trilogy or other. Most of the time, as I may have said before, I’m unimpressed. Often it means that the writer can’t seem to figure out how to wrap up the story in a single book. I think it’s great if a book is so good and so well-received that it inspires a sequel, but just like movies, every book these days has to come with a sequel.

by Jonathan Holt, I can actually see the need for a sequel. The plot is so complex, with so many threads to follow, that you could never wrap it up in one book. A few of the plotlines you’ll need to keep straight:

– Captain Kat Tapo of the Carabinieri is investigating her first murder case: a woman found in the canal, shot in the head, wearing the robes of a Catholic priest.

–  Colonel Aldo Piola, a seasoned investigator, is supervising Tapo on this case. There’s chemistry between the two of them and Piola has a reputation…

– Second Lieutenant Holly Boland is thrilled to be back in Italy, even if the assignment – a sort of community liaison officer – doesn’t sound terribly exciting. However, Boland’s first official task – look for some documents related to a Freedom of Information Act request – may be very exciting. And Dangerous.

– Daniel Barbo, a computer genius with a tragic past, has designed the ultimate virtual reality space for Italians – Carnivia.com, a detailed and eerily accurate rendition of Venice. Like the city itself, Carnivia contains many secrets – some that might be worth killing for.

There are actually a couple of other interesting plotlines, but if that doesn’t pique your interest, you may be unpiquable. Holt does an excellent job of moving the story forward, keeping the plotlines interwoven but not tangled, and keeping you turning the pages. It’s a great mix of characters, an amazing and exotic setting, with plenty of action and intrigue. The plot takes off in completely unexpected directions, and by the end of the book, you feel as though you have wandered into a totally different story. It was an excellent read and I am actually looking forward to the sequel, The Abduction, coming out in May.

My copy of The Abomination

was an Advanced Reader Copy, provided free of charge by the good folks at HarperCollins Publishers.

Help an author choose a title!
New on the Shelves…