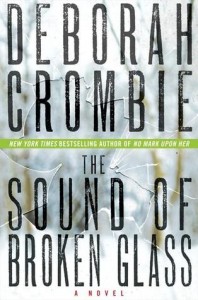 I’ve got a great guest post for you today from the author of a mystery series I really enjoy! Deborah Crombie, author of The Sound of Broken Glass

has a post for us and I learned something surprising – she’s not British! I wouldn’t have guessed, reading the Duncan Kincaid/Gemma James stories, that they were written by an American. So, for today, a little about how an American Writer Writes Brit:

Readers are always curious as to how an American writes about England, and the English. I have an advantage in that I’ve lived in both England and Scotland. But I fell in love with Britain long before I lived there–in fact, it was the other way around. (Or the other way round, in Brit speak.) I’ve never been able to explain just how this dream of Britain crept its way into my subconscious. I can’t remember a time when I wasn’t fascinated by British books and stories and history, although I can cite some influences, in retrospect. Many of them were an ideal Britain translated into fantasy; C.S. Lewis’s Narnia, Tolkien’s Middle Earth, Alan Garner’s haunting Cheshire, T.H. White’s wild Avalon. Then came the immersion in Christie and Sayers and Allingham, the Britain of the Golden Age mystery. And how could I leave out Holmes? There were English sagas, Delederfield and Winston Graham. Then James Herriott’s Yorkshire. And wonderful romantic suspense by writers like Mary Stewart and Victoria Holt.

I’m sure I can blame a good bit on public television, too, as Masterpiece Theater and British comedies and even Doctor Who introduced America to language and culture that was similar enough to seem familiar but different enough to be enchanting. When I visited England for the first time in my early twenties, the stage was already set. I’m still surprised, years later, by the sense of identification I felt. Homecoming. Weird and wonderful and scary all at once.

Living there a few years after that first visit, I found things often not nearly as cozy and romantic as the Britain of my imagination, but somehow that didn’t change my attachment. If anything, living with Britain-unvarnished made the feeling stronger. When I came back to live in the US I longed for Britain with a physical ache, a sort of psyhic missing limb syndrome. So I wrote the first Duncan Kincaid/Gemma James novel out of homesickness, and out of a desire to use the patterns of language I heard in my head. (Writers have an excuse for hearing voices…)

I placed my detectives in London, with jobs at Scotland Yard, so that I could send them to the settings in more rural Britain that so fascinated me. But a funny thing happened. I fell in love with London just as passionately, maybe even more so, than with that other England. London is a country in itself–there is always something new to learn, to do, to see.

So that’s the history of how an American came to write British. How does it work now, this writing from a distance thing? I go to England a couple of times a year. I almost always spend time in London, and if a story takes me (and my characters) out of London, I go there, too. When I stay in London I let (Brit speak) a flat, so that I can walk the neighborhood and go to the shops and pubs and supermarkets, and do all the everyday things that my characters do. I watch a lot of British television, because you see (and learn) things there that you never see in the US. I go out with English friends and do all the ordinary things that people do–it is in an odd way a separate life.

When I’m not in the UK, I keep up with British newspapers and telly and films and, of course, books. The Internet has been a huge research blessing (can I say how much I love Google Maps?) It has made it so much easier to be virtually if not physically there.

And I am still, always, when I am not in Britain, a little homesick, and that keeps the stories going in my head.