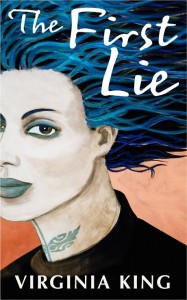 You might remember that a short time back, I ran a link to a survey run by author Virginia King. Well, she decided on a title and she put together a great guest post for us on why she always cries at the end of her novel…

Crying at the End

I always cry at the end of my novel. Always. Even though I know every word, every aching resolution of the themes as they tumble into place. Why?

“Crying at the end” doesn’t have to be taken literally. It’s a metaphor for feeling deeply satisfied and moved but also a little surprised, and challenged to join a few dots. It describes the ending that continues to play out in the reader’s mind long after the book is closed.

Obviously the ending of The First Lie isn’t surprising to me. Not any more. I’ve read it and tweaked it a thousand times. Do I cry because I’m in love with it? All authors need to be wary of this one – the blind belief that every phrase is as perfect as a newborn baby – but the end of my book has been edited within an inch of its life by my editor, so there must be something else going on.

The answer may lie in the way the ending evolved:

If you’ve already written the ending of your novel, give it the “cry” test.  If it doesn’t move you, I’d encourage you to “flip it”. It’s an exercise from my Catch the Whisper workshop: (a) put the final dialogue into the mouth of the other character and see what happens, or (b) change one or more crucial verbs to the opposite action and allow the scene to play out beyond your planning, or (c) turn any clichés upside down to break the pattern of your thoughts. The outcome might make you cry.