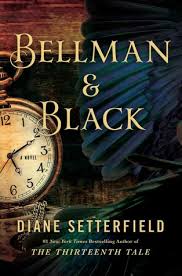 by Diane Setterfield, we start with a group of boys, playing in the woods. One boy, William Bellman, kills a rook with his slingshot. Even as a child, he recognizes the moment as significant, but he can have no idea then how this single childhood moment will influence his life.

The Bellman family is a prosperous one, but William and his mother have their difficulties. His uncle, Paul Bellman, takes him under his wing, into the family business, and soon comes to appreciate William’s work ethic and his unique abilities. The mill prospers, Paul is pleased with his protege, and William seems unstoppable. Success after success seems to follow William – at the mill, in his marriage, with his children. But still, there’s the rook…

Have you ever finished a book and felt as though there were nuances you did not quite grasp? I felt that way with Bellman & Black. There seemed to be a moral to the story that eluded me. Was William really haunted by the rook? I thought so, but I’m not sure. How much of Mr. Black was real and how much was William’s imagination? Again, it’s hard to say. But the uncertainty, the feeling that there is more going on than meets the eye, made this a particularly good read.

It’s hard not to like William. He is cheerful in the face of his grandfather’s malice. He is an industrious young man who wants to make a success of himself, and you find yourself rooting for him. Even as he is building the complex enterprise that will become Belmont & Black, I was impressed by his daring and the dogged way he pursued his goals. But as the enterprise unfolds, you begin to worry about him. There is definitely something off-kilter in his thinking, and the reader can see trouble on the horizon.

The chapter breaks about rooks, crows and ravens were fascinating. I had never thought of a rook as a particularly mystical bird, but the author has given a great deal of thought to what rooks think about:

What does the rook do with this leisure time?

1) he tells jokes and gossips

3) he learns to speak foreign languages. The rook can imitate the human voice, a logger’s crane, the crash of broken glass. And if he wants to really make fun, he can call your dog to him – with your own whistle.

4) he enjoys poetry and philosophy

5) he is an expert in rook history

These asides make the rooks real characters and give them an important part in the story. Just how important, I’m still not sure I know – and I find I enjoy the uncertainty.

My copy of Bellman & Black

was an Advanced Reader Copy, provided free of charge by Atria Books.