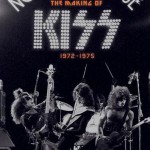 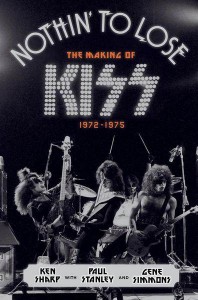 . Author Ken Sharpe has pulled together an amazing series of interviews with former band members, roadies, industry and media people. In addition, there are a host of more recognizable names: Joe Perry (Aerosmith), Iggy Pop, Ted Nugent, Alice Cooper, Eric Bloom (Blue Oyster Cult), Neal Schon (Journey), Bob Seger, and Dee Dee, Joey, Johnny, Marky and Tommy Ramone. There are a lot of great quotes and interviews in the book – perhaps too many.

There are a number of things about this book that I loved. First, the interviews – it was fascinating to read the quotes from other musicians, people that liked Kiss and those who didn’t, bands who were more popular and those who were just starting out. Hearing what these bands had to say about Kiss, good and bad, gives you some context. Kiss was doing something very new and different, with the makeup and the theatrics. Some of their contemporaries embraced it, while others hated it; some were amused and others may have been a little jealous. But hearing them talk about the band – particularly those who said it was a gimmick and they would never make it – is definitely interesting.

The interviews with friends and industry people are a real look at what goes into launching a band. How difficult it is to get a label’s attention and then, once you have it, how to keep it. Getting signed certainly doesn’t guarantee success, and it is clear from each section of the book that if Kiss hadn’t had a few people who really believed in them, they’d have been doomed. Neil Bogart (Casablanca Records) and Bill Aucoin (their manager) did everything from manage, produce and promote the band to paying for their tours on their personal credit cards. Considering that they didn’t get a lot of radio airplay and they often had difficulty getting signed on as an opening act, they would never have gotten off the ground without their unflagging support. It was truly amazing to read just how much people invested in the band, and I don’t mean just the money involved to get an act like this rolling.

It’s also clear that Paul Stanley and Gene Simmons shared a dream for their band and were willing to work very hard to make it  reality. There is a sort of single-minded devotion to the band and a refusal to believe that they would be anything other than huge stars that is, by turns, endearing and annoying.

For me, the downside of Nothin’ to Lose is that it sometimes got a little tedious. There is a definite “us against the world” vibe to the book, and it can get a little tiresome. Perhaps it’s accurate – perhaps there really were almost no supporters for the band in the early days – but it is reiterated so often that it seems like overkill.

I was also disappointed that the book really glosses over the departures of Peter Criss and Ace Frehley. I was interested in reading about that, perhaps even getting some of the story right from the departed band members (a timely topic, considering the controversy surrounding the Rock and Roll Hall of Fame inductions). Unfortunately, their departures are covered only briefly on the last two pages of the book. Still, the book is an amazing look at a young band, on its way to stardom and all the ups and downs of that journey. There are some great stories here for anyone who was a member of the Kiss Army, and anyone interested in a slice of rock and roll history.