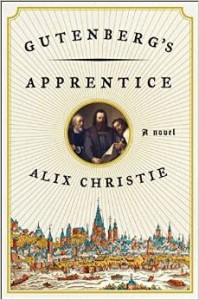 An enthralling literary debut that evokes one of the most momentous events in history, the birth of printing in medieval Germany—a story of invention, intrigue, and betrayal, rich in atmosphere and historical detail, told through the lives of the three men who made it possible.

Youthful, ambitious Peter Schoeffer is on the verge of professional success as a scribe in Paris when his foster father, wealthy merchant and bookseller Johann Fust, summons him home to corrupt, feud-plagued Mainz to meet “a most amazing man.”

Johann Gutenberg, a driven and caustic inventor, has devised a revolutionary—and to some, blasphemous—method of bookmaking: a machine he calls a printing press. Fust is financing Gutenberg’s workshop and he orders Peter, his adopted son, to become Gutenberg’s apprentice. Resentful at having to abandon a prestigious career as a scribe, Peter begins his education in the “darkest art.”

As his skill grows, so, too, does his admiration for Gutenberg and his dedication to their daring venture: copies of the Holy Bible. But mechanical difficulties and the crushing power of the Catholic Church threaten their work. As outside forces align against them, Peter finds himself torn between two father figures: the generous Fust, who saved him from poverty after his mother died; and the brilliant, mercurial Gutenberg, who inspires Peter to achieve his own mastery.

Caught between the genius and the merchant, the old ways and the new, Peter and the men he admires must work together to prevail against overwhelming obstacles—a battle that will change history . . . and irrevocably transform them.