October is apparently Mystery Month here on the Shelves – lots of new mysteries for me to read! Next on the pile, Want You Dead (Detective Superintendent Roy Grace) 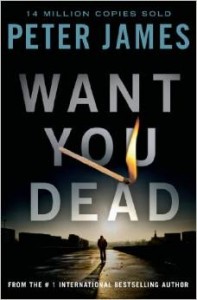 In Peter James’ Want You Dead, thirty-year old Red Cameron meets handsome, charming and rich thirty-five year old Bryce Laurent through an online dating agency, and is instantly attracted to him. But as their love blossoms, the truth about his past begins to emerge, and with it his dark side. Everything he has told Red about himself turns out to be a tissue of lies, and her infatuation with him gradually turns to terror.

Within a year, and under police protection, she evicts him from her flat and her life. But far from being over, her nightmare is only just beginning. For Bryce is obsessed and besotted with her. He intends to destroy, by fire, everything and everyone she has ever known and loved—and then her, too. It’s up to Detective Superintendent Roy Grace to stop him before it’s too late…