Review: The Deep by Nick Cutter 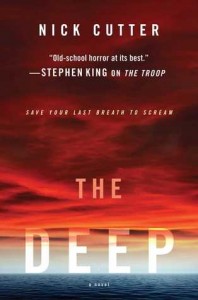 starts out with a very promising premise: a strange plague is afflicting humanity on a global scale. Scientists have stumbled upon a possible cure — at the bottom of the Mariana Trench. In a desperate race to save the human race, governments have come together to build a research station at the bottom of the ocean, eight miles underwater. The Trieste may be man’s last hope, but there is something lurking there, and the cure they are researching might not be benign.

I loved the beginning of the novel. The plague itself is horrifying: those suffering with The ‘Gets slowly begin to forget everything. At first, it’s small things, like where they left their car keys. Later, it’s their name, how to feed themselves, even how to breathe. The situation is dire enough to imagine this sort of multinational cooperation and expenditure. Luke Nelson has been called to the site of this amazing research station to try and retrieve his brother, Clayton. Clayton is difficult and unpleasant, probably a bit of a sociopath, but he is also a genius, a brilliant researcher and he is currently at the bottom of the ocean and he has stopped communicating with the researchers on the surface. They hope his brother can draw him out, but that means sending his brother on that long, cold, dark journey to the ocean floor.

It’s a great build up. I was reading the novel while on a business trip, in a hotel room far from home. The descriptions of the research station were strangely in tune with the hotel: the strange shadows and unexpected noises, the feeling of isolation combined with the weird watched feeling you get when you’re surrounded by strangers – it was the perfect atmosphere for reading something like this. It really gave me the creeps. The story itself was pretty engaging, especially when you start learning the backstories of the various characters. Luke and Clayton had a pretty rough childhood and they have never been close. The other scientists have their own tragic pasts and early on, you begin to wonder if that is a coincidence. There is definitely something happening on the Trieste, and it’s not something good.

My real problem with the book is the ending. After a great build-up, great stories hinting at something evil, something strategic and inhuman, the ending really fell flat. I found some of the conclusions just too much to swallow – the idea that whatever this lifeform might be, it had the sort of influence they suggested was too implausible. The last scene was even more disappointing to me. I don’t require that a book wrap up every storyline in a ribbon and present it to the reader all neat and tidy – in fact, I would prefer that it did not – but this felt like taking the easy way out. I still have another book by Nick Cutter on the shelf – The Troop

– and I plan to give it a try. The Deep had so much potential, but a really flat finish.

My copy of The Deep