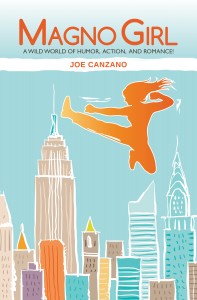 Sometimes, there are books that I’d really like to read, but I know I am already over-committed and I just have to say no. But that doesn’t mean YOU can’t read it! So today, I’ve got a guest post from Joe Canzao, author of Magno Girl

. I loved the synopsis:

When a Manhattan pizza maker is found dead in his own dough, Magno Girl enlists the aid of her biker ninja boyfriend to help solve the crime – and quickly discovers there’s more to the pie than meets the eye, including a sinister plot that spans the globe.

Magno Girl leaps into action. After all, she can fly, she can fight, and she can use her fearsome superpower, the “Gaze of the Guilt,” to bring a hardened criminal to his knees. But the road ahead is hard. The city’s other superheroes despise her, and the cops don’t want her around, and her own mom won’t stop spitting out advice about marrying a “respectable guy” and trading in her crime-fighting career for a baby carriage—but is she attracted to “respectable guys”? And is she interested in emotional commitment? And will finding real love be her biggest challenge of all?

“So, what kind of novel do you have?”

“Yeah, but is it a mystery? A science fiction book? What is it?”

There was a time when this was a normal conversation for a writer of comedy fiction. Comedy only existed inside of other pigeonholes. The Hitchhiker’s Guide to the Galaxy was sold as a science fiction book – and it is sci-fi, but isn’t it humor first? I found it in the sci-fi section of the bookstore. Do you remember book stores? They were like phone booths and buffaloes—once there were millions of them, but now, not so much.

Thanks to the internet, there is now a “humor” section in the book world, and I appreciate that change. I can call my novel “humor”, and then drill it down to other things that it’s related to, but really isn’t. I’m talking about something like fantasy. If I call my book “fantasy” it will not be what readers of that genre expect. It sure doesn’t belong anywhere near The Lord of The Rings.

Don’t get me wrong, I love Gandalf and his merry gang—THAT book is true fantasy. That’s old school, high fantasy, where men are men and hobbits are hobbits and women are scarce.

When all is said and done, I call my novel, Magno Girl, “comic urban fantasy,” since that’s the closest thing that fits outside of just calling it “humor.”

You can read a pdf of the first 20 pages right here: http://www.happyjoe.net/Magno_Girl_15.pdf

And now for the giveaway! Leave me your name and email (it won’t be visible to anyone but me) and tell me what your Superpower would be! US residents only, please. Enter by 5pm EST on Sunday, February 15th, and I will announce the winner on Monday. Good luck!