Okay, working my way through the list, this morning we’ve got John the Pupil 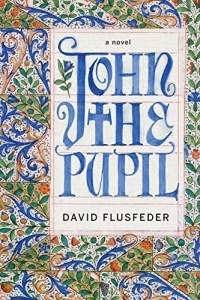 Set in thirteenth-century Europe, against the backdrop of a medieval world where beauty and violence, science and mysticism, carnality and faith, exist side by side, this is a masterful, mystery-laden novel from the author of The Gift, in the tradition of Umberto Eco, Barry Unsworth, and Michel Faber.

Since he was a young boy, John has studied at the Franciscan monastery outside Oxford, under the tutelage of friar and magus Roger Bacon, an inventor, scientist, and polymath. In 1267, Bacon arranges for his young pupil to embark on a journey of penitence to Italy. But the pilgrimage is a guise to deliver scientific instruments and Bacon’s great opus to His Holiness, Pope Clement IV. Two companions will accompany John, both Franciscan friars: the handsome, sweet-tempered Brother Andrew, with whom everyone falls in love; and the more brutish Brother Bernard, with his secret compulsion for drawing imaginary monsters. Neither knows the true purpose of their expedition.

John the Pupil is a medieval road movie, recounting the journey taken from Oxford to Viterbo in 1267 by John and his two companions. Modeling themselves after Saint Francis, the trio treks by foot through Europe, preaching the gospel and begging for sustenance. In addition to fighting off ambushes from thieves hungry for the thing of power they are carrying, the holy trio are tried and tempted by all sorts of sins: ambition, pride, lust—and by the sheer hell and heaven of medieval life.

Erudite and earthy, horrifying, comic, humane, David Flusfeder’s extraordinary novel reveals to the reader a world very different and all too like the one we live in now.