This is an interesting one – Forgiving Maximo Rothman

by A. J. Sidransky 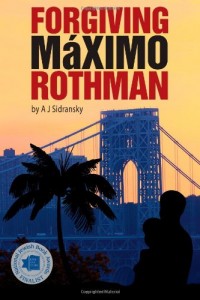 On a chilly autumn night in New York, the lives of two men born decades and continents apart collide when Max Redmond is found bludgeoned in his Washington Heights apartment. While investigating the crime, Detective Tolya Kurchenko comes across the dead man’s diaries, written by Redmond over four decades. He hopes the diaries will lead him to the killer. In fact, they help him sort out the complexities of his own identity. Spanning 65 years and three continents — from Hitler’s Europe to the decaying Soviet Empire of the 1970s, and revealing the little-known history of Sosua, a Jewish settlement in the jungles of the Dominican Republic — A. J. Sidransky’s debut novel leads us into worlds long gone, and the lives of people still touched by those memories.