This sounds so unusual! Of Things Gone Astray 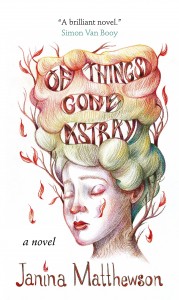 Here is a quirky and fantastical novel about things lost and things found from a startling new voice in fiction.

On a seemingly normal morning in London, a group of people all lose something dear to them, something dear but peculiar: the front of their house, their piano keys, their sense of direction, their place of work.

Meanwhile, Jake, a young boy whose father brings him to London following his mother’s sudden death, finds himself strangely attracted to other people’s lost things. But little does he realize that his most valuable possession, his relationship with his father, is slipping away from him.

Of Things Gone Astray is a magical fable about modern life and values and finding the things that really matter.

Review: Normal by Graeme Cameron
New on the Shelves…