This one sounds interesting – a woman with an unusual background and a husband who may not be trustworthy. Monday’s Lie 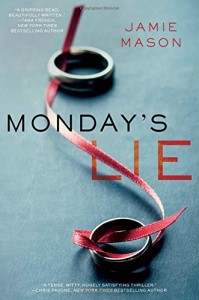 From the acclaimed author of the “ripping good” (The New York Times) debut novel Three Graves Fullcomes a new thriller about a woman who digs into her unconventional past to confirm what she suspects: her husband isn’t what she thought he was.

Dee Aldrich rebelled against her off-center upbringing when she married the most conventional man she could imagine: Patrick, her college sweetheart. But now, years later, her marriage is falling apart and she’s starting to believe that her husband has his eye on a new life…a life without her, one way or another.

Haunted by memories of her late mother Annette, a former covert operations asset, Dee reaches back into her childhood to resurrect her mother’s lessons and the “spy games” they played together, in which Dee learned memory tricks and, most importantly, how and when to lie. But just as she begins determining the course of the future, she makes a discovery that will change her life: her mother left her a lot of money and her own husband seems to know more about it than Dee does. Now, before it’s too late, she must investigate her suspicions and untangle conspiracy from coincidence, using her mother’s advice to steer her through the blind spots. The trick, in the end, will be in deciding if a “normal life” is really what she wants at all.