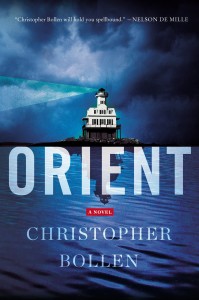 There are always quite a few murder mysteries in my TBR pile, so only the really good ones stand out. Orient

by Christopher Bollen is definitely in that pile – I have to admit that I did not guess the murderer until the very end, and I certainly didn’t guess the motive. I like it when a book can surprise me.

Mills is a bit of a drifter, a foster kid who has fallen on hard times and is rescued by a neighbor, Paul Benchley. We know from the first few paragraphs of the book that there will be murders. We know that Mills will be blamed for them, even though he didn’t commit them, and he gives us some clues as to the murderer. The clues didn’t help me unmask the killer; they just made me suspicious of everyone we meet in Orient.

Paul offers to take Mills to his family home in Orient, on the North Fork of Long Island. It’s an isolated town, lots of families who have been there for generations, and the town is undergoing some rapid changes as new money and new people flood in. In particular, there are a lot of artists coming to the community. Not nice folks who want to paint the lighthouses along the shore. No, these are big-time, big money modern artists, the kind who will bash through your dining room wall with a sledgehammer, expose the pipes underneath, throw glitter on them and call it an installation piece (and charge you $100,000). They have very different sensibilities than the long-time residents, and the cultures are bound to clash. Some neighbors welcome the new blood and the new money that comes with it. Others are afraid of losing the quaint and peaceful town they’ve always known. There is plenty of hostility and distrust on both sides.

In addition, there is the threat of Plum Island Animal Disease Center – a research facility that some residents believe is working on dangerous projects. When a strange, mutated carcass washes up on an Orient beach, even the skeptics begin to wonder…

Paul puts Mills to work cleaning out two generations of hoarding in the old family home, where he discovers some secrets about his benefactor and the town. He becomes friendly with Beth, a failed artist struggling with her husband’s artistic success and a bad case of “I have everything I wanted so why am I not happy?” There are conflicts on the island between the successful artists who are driving up real estate prices and long-time residents who want to keep Orient a sleepy village, frozen in time. When long-time residents start turning up dead, it’s easy to point fingers at the new kid in town.

I didn’t recognize, at the start of the book, that the places Bollen mentions – Orient, Plum Island, Oysterponds, etc – are real places. I think that adds to the appeal of the book, the idea that you could take a drive through the streets you’ve read about, stand on the beach and look towards the lighthouse.

Beth became a real source of annoyance for me (which may have been intentional, on Bollen’s part). She’s an artist who doesn’t paint because she’s afraid to fail, even though her husband is supportive and encouraging. Her husband agrees to leave New York City and move out to this little island town because his wife wants to go home again. Her mother gives her a beautiful, spacious home on the island. She and her husband want to have a baby, but now that she finds out she’s pregnant, she hasn’t told her husband and she is considering an abortion. She has everything she wants, she gets everything she asks for and she is still not happy. She is the kind of character you want to grab by the shoulders and give them a good shake, ask them if they have any clue just how lucky they have been and how pathetic they are for not appreciating it. It’s infuriating! But you hope they have time to work it all out.

Really enjoyed this one, mostly because it was tough to see where the story was going. There were several angles – conflict on the Historic Board, a drunken handyman who knows all the town’s secrets, crazy artists and the looming presence of Plum Island, which may be slowly poisoning the residents. I admit I didn’t care for that last storyline, but it didn’t keep me from enjoying the mystery.

My copy of Orient

by Christopher Bollen was an Advance Reader copy, provided by the good folks at Harper Collins. It is set for release on May 5, 2015.