Review: The Martian by Andy Weir 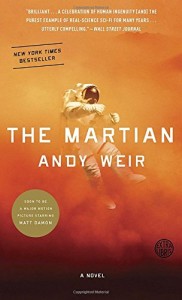 PEOPLE OF EARTH: DROP WHAT YOU ARE DOING AND BUY THIS BOOK.

I can’t tell you how much I loved this book. This is the sort of book that makes you bounce in your chair while you’re reading it. You know that little frisson of glee that you get as a reader when you know something really cool is about to happen? I got that a lot in this book.

Mark Watney is a crew member on the third manned mission to Mars. Not as cool as being on the first mission, but still pretty darned cool for a botanist. But once they’ve landed, there’s a problem: a powerful sandstorm with winds strong enough to do damage to their equipment and living quarters.

Everyone thinks Watney is dead; there is no reason to think otherwise. So they leave…and Watney wakes up to find himself stranded on Mars, with about a year’s worth of food, four years until the next Mars mission, and no way to contact Earth.

But he has science on his side! He’s a botanist – he can grow food. He understands how the space station works (and if he doesn’t, the computer has all the plans and specs and instructions and he’s got plenty of time to study them). He’s a scientist and he is going to science the hell out of all of this and figure out how to stay alive, how to contact Earth, and how to get home.

This is a book about science, but in the most entertaining way imaginable. Watney knows his stuff and as a narrator, he does a great job of explaining it to the reader. He explains how the supplies get there, how the space stations work, how they make fuel and water and oxygen. The descriptions of how he repurposes pieces of the ship and how he re-engineers the systems to grow food, communicate with Earth, and make his existence more comfortable were endlessly entertaining.

“Yeah, I know. A lot of my ideas involve setting something on fire. And yes, deliberately starting a fire in a tiny, enclosed space is usually a terrible idea. But I need the smoke. Just a little wisp of it.

“As usual, I’m working with stuff that was deliberately designed not to burn. But no amount of careful design by NASA can get around a determined arsonist with a tank of pure oxygen.”

Eventually, Watney makes contact with Earth and then the race is on to figure out a way to rescue him. As expected, it’s not just about the science — it’s a political and financial challenge, as well. The NASA scientists are dedicated to bringing him home, and you can’t help joining in the people around the world rooting for him.

This book was recommended to me by a friend with excellent taste. My copy of The Martian

is a permanent addition to my personal library.