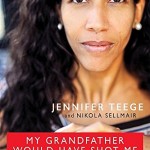 Review: My Grandfather Would Have Shot Me by Jennifer Teege

As soon as I heard the story behind My Grandfather Would Have Shot Me: A Black Woman Discovers Her Family’s Nazi Past

by Jennifer Teege and Nikola Sellmair, I knew I wanted to read the book:

When Jennifer Teege, a German-Nigerian woman, happened to pluck a library book from the shelf, she had no idea that her life would be irrevocably altered. Recognizing photos of her mother and grandmother in the book, she discovers a horrifying fact: Her grandfather was Amon Goeth, the vicious Nazi commandant, chillingly depicted by Ralph Fiennes in Schindler’s List – a man known and reviled the world over.

The story is certainly compelling. Teege is German, she lived and studied in Israel and has many Jewish friends. Her mother placed her in foster care as a young girl and until she was formally adopted, she stayed in contact with her mother and grandmother. She has fond memories of her beloved grandmother and she cannot reconcile that woman with the horror of her grandfather. She cannot understand why no one shared this story with her, told her this bit of family history. It upends her into a deep depression.

Over time, Teege confronts her past and her family history. She visits Plaszow, the concentration camp where Amon Goeth, her grandfather, committed atrocities while her grandmother lived in a well-appointed villa next to the grounds. She reconnects with her mother, looking for answers. She makes contact with her father. She tries to make sense of her own story by reading the stories of others, whose relatives were also Nazis, and how they dealt with the legacy. She tries to figure out how she will tell her Jewish friends, living in Israel, that her grandfather may have been responsible for the deaths of some of their loved ones. It’s a situation I can’t begin to imagine.

As I said, I found the story compelling, but the storytelling doesn’t do it justice. Jennifer Teege is not a great writer, and she might have been better served by a ghostwriter. The sections written by Nikola Sellmair really salvage the book, providing historical background and interviews with friends and relatives of Teege’s. I was also surprised that I didn’t find Teege a more sympathetic character. I thought she was truly awful to her adoptive parents, no longer addressing them as Mama and Papa. She basically abandons her children and husband as she tries to deal with these revelations. I can’t imagine what she must have been going through, but I also can’t imagine the pain of a parent, who has raised an adopted child from a very young age, suddenly being called Inge instead of Mama.

My copy of My Grandfather Would Have Shot Me: A Black Woman Discovers Her Family’s Nazi Past

came from my local library. 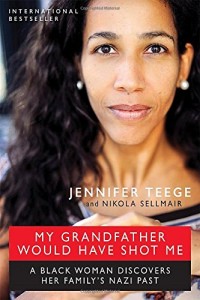 2 comments for “Review: My Grandfather Would Have Shot Me by Jennifer Teege”