Now, I’ve got some new stuff to share that I hope to be reviewing soon. First up is Hubris: The Tragedy of War in the Twentieth Century 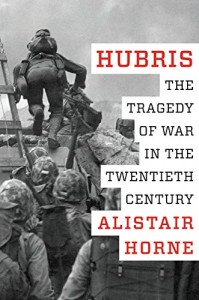 Sir Alistair Horne has been a close observer of war and history for more than fifty years and in this wise and masterly work, he revisits six battles of the past century and examines the strategies, leadership, preparation, and geopolitical goals of aggressors and defenders to reveal the one trait that links them all: hubris.

In Greek tragedy, hubris is excessive human pride that challenges the gods and ultimately leads to total destruction of the offender. From the 1905 Battle of Tsushima in the Russo-Japanese War, to Hitler’s 1941 bid to capture Moscow, to MacArthur’s disastrous advance in Korea, to the French downfall at Dien Bien Phu, Horne shows how each of these battles was won or lost due to excessive hubris on one side or the other. In a sweeping narrative written with his trademark erudition and wit, Horne provides a meticulously detailed analysis of the ground maneuvers employed by the opposing armies in each battle. He also explores the strategic and psychological mindset of the military leaders involved to demonstrate how devastating combinations of human ambition and arrogance led to overreach. Making clear the danger of hubris in warfare, his insights hold resonant lessons for civilian and military leaders navigating today’s complex global landscape.

A dramatic, colorful, stylishly-written history, Hubris is a much-needed reflection on war from a master of his field.