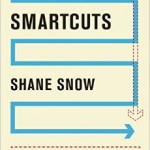 This review is part of my New Year’s Clean Up My Review Pile project. I finished this book months ago, but somehow never quite got around to the review. Something always came up – something else to review, or my Kindle had a dead battery, or something. But I came across it on the finished list a couple of weeks ago and I have since been recommending it like crazy – mostly to my coworkers. Smartcuts: How Hackers, Innovators, and Icons Accelerate Success

is a terrific book about lateral thinking and how looking at problems from new angles and not taking the same old path can bring you real success.

In this book, I’m going to show you how overachievers throughout history have applied lateral thinking  to success in a variety of fields and endeavors. In doing this, I plan to convince you that the fastest route to success is never traditional, and that the conventions that we grow up with can be hacked. And most important, I want to show you that anyone – not just billionaire entrepreneurs and professional mavericks – can speed up progress in business or life.

That’s a pretty tall order. But I found things I could glean from this, things I expect to use in my career and the rest of my life. The most powerful lesson for me was that creating that path to success, that unconventional path, means thinking about the whole problem differently.

Snow provides great examples that are great fun to read. How Benjamin Franklin got his start in publishing. The paths that our greatest presidents took to get to the White House. How Jimmy Fallon got to be on Saturday Night Live. One of my favorites was about how Great Ormond Street Hospital (GOSH) in London had improved the survival rate of the children it treated by working with a Formula 1 racing team.

You see, the hospital acknowledged that they had a problem with “handovers” – the process of transferring one of their tiny patients from the care of the cardiac surgery team in the operating room, to a transport bed, then to a bed in the ICU. Lots of opportunities to screw that up, to make mistakes, and it was costing patient lives, until two tired doctors sat down in front of the television in the break room and had an epiphany while watching an auto race:

“In seven seconds, the pit crew tore off four tires, filled a tank of gas, screwed on four new tires, and leapt out of the way for the car to scream back onto the track. Working as if controlled by a hive mind, the Formula 1 crews made the GOSH staff look like monkeys fighting over ventilator tubes.

So we phoned them up.”

The rest of the story is fantastic, a real pleasure to read. They worked with a Ferrari pit team in Italy and observed key things about the processes they used. They mapped out every potential problem, they worked with physical space between the crew members, they had a crew member who oversaw the entire process, they worked silently, without chatter. The hospital team found ways to adopt many of these ideas, including hiring dance choreographers to help team members learn how to work around each other without getting in each others’ way. And in doing so, they reduced their worst handover errors by a staggering 66%.

The thing that is most amazing to me: that they got someone to even consider the idea of running an operating theater like a Formula 1 race pit.

But that’s really what the book is about – it’s about unconventional ideas and how to look at a problem differently. The final section of the book is on SpaceX (fitting for me, since they are a client of the company I work for). As you might have heard, SpaceX recently did what no one has done before: they launched a rocket, brought it back to Earth, and landed it safely, ready to be reused. Conventional wisdom has always said that was impossible, but conventional wisdom is often wrong. My takeaway from that section: you can make something (a widget, a process, or a rocket) 10% better, or you can make it 10 times better, but to get to 10 times better, you have to be willing to completely tear it down and start from scratch, no preconceived notions, no sacred cows. How can you not think of a practical, business application for an idea like that? My company has herds of sacred cows, things that no one is willing to change, but I hope that in my little corner of the corporate office, I can get someone to rethink those ideas. Even if the only person I can persuade is me. That will be a start.

is an engaging read, full of great ideas and terrific stories. It’s proof that a useful business book does not have to be dry and tedious. My copy of Smartcuts

by Shane Snow was an Advanced Reader Copy, provided free of charge by the good folks at HarperCollins. 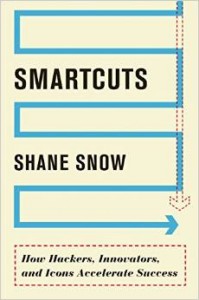