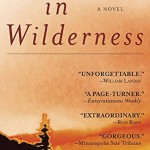 Review: In Wilderness by Diane Thomas

I am woefully behind on reading and reviews, but this is a great story to get me back on track. In Wilderness

by Diane Thomas is a fascinating story told with a beautiful, poetic writing style. I was immediately drawn to the characters and the lyrical way the story is told made it a real pleasure to read.

It’s 1966 and Katherine Reid is dying – an unidentifiable, wasting illness that the doctors cannot put a name to and can do nothing to stop. Her life has been slowly disintegrating for the last four years, a series of tragedies, leaving her on her own with her failing health. She can’t keep food down. She is growing thinner and weaker, fading away, and the doctors can’t offer her any solutions.

One doctor tells her how, a hundred years ago, they would have told a patient like her to try a change of scenery, take a grand tour of Europe, live a little before the end. This gets her thinking. On impulse Katherine buys an isolated cabin in the North Carolina wilderness. She plans to hike in with a duffel bag full of food and warm clothes, the few things she will need in the weeks she has left. She chooses it as her place to die.

Instead, she begins to get well. She can keep food down, she’s getting stronger, and she is enjoying the quiet isolation of the forest. But when you’ve come to the wilderness to die…and then you don’t…what do you do next?

Danny is barely out of his teens and crippled with PTSD. After his discharge and a horrifying incident in California, he came to the wilderness to get away from people and his fear of what he might do. He watches Katherine as she works in the garden, as she walks to the privy, he sleeps by a chink in the cabin wall, where he can hear her breathing. When he finally storms into her life, it’s just a matter of time before he can’t keep his demons at bay.

Katherine’s story is compelling all on its own. I was amazed at her strength and thought about how satisfying it must be to choose the way you will go out; so few of us are able to do that. Danny scared me from the moment he appeared on the page. The stalking was terrifying, even moreso since Katherine doesn’t even know she’s being stalked. Their meeting was inevitable and I found myself holding my breath, waiting for the clash that had to be coming.

is an intriguing story and a pleasure to read. My copy was provided free of charge through LibraryThing’s Early Reviewer Program.

Quotables
Is your dictionary sexist?