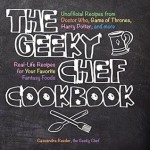 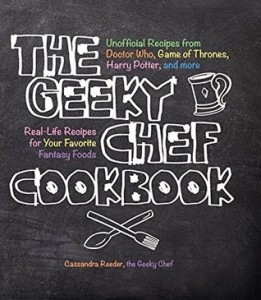 This is the perfect cookbook for all you geeks out there – and I know you’re out there.  Have you ever wanted to make a nice mug of Romulan Ale while you kicked back and watched The Wrath of Khan? Maybe whip up some Butterbeer for the Harry Potter fans? Or even a bowl of Arya Stark’s favorite Bowl o’Brown, while you binge-watch Game of Thrones? Makes perfect sense to me! And Cassandra Reeder went that one better in The Geeky Chef Cookbook: Real-Life Recipes for Your Favorite Fantasy Foods – Unofficial Recipes from Doctor Who, Game of Thrones, Harry Potter, and more

. She actually put together recipes for some of the classic dishes from your favorite sci-fi and fantasy shows. 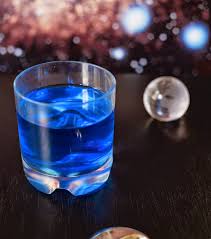 . And I think it’s perfectly natural to be curious about what these dishes taste like. When I first read The Lord of the Rings, I had graham-cracker lembas – now I can have the “real thing.” Reeder’s recipe – which is a sort of cracker flavored with macadamia nuts, honey, and orange zest – sounds like exactly the sort of thing I would expect elves to be baking.

The recipes are fairly simple, without too many unusual ingredients. (And just for the record, the recipe for Soylent Green does NOT include people.) I think a lot of these would be fun for parties; I could see feeding fellow Serenity fans Mudder’s Milk and Fruity Oat Bars, just for the hell of it. The index lists the recipes by their source, so you can make a meal from your favorite franchise. I also love Reeder’s stories to introduce the recipes – in the introduction to Cellular Peptide Cake with Mint Frosting, from Star Trek: The Next Generation, she gives you the rundown of the episode, “Phantasms”, and Data’s odd dream where Deanna Troi’s head turns into a cake. Reeder explains that she decided to use yogurt as a moistener in the cake because yogurt contains living bacteria and so it represents the living cellular peptide from the episode. Clearly, she not only loves to cook, but she has put a lot of thought into these recipes. 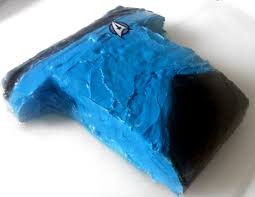 There were some franchises I didn’t recognize in the book, mostly video games (Deadly Premonition?) and old TV shows (Adventure Time), but there were enough that I was familiar with to really enjoy the recipes. I will definitely be hauling this one out for parties with other sci-fi fans!

My copy of The Geeky Chef Cookbook: Real-Life Recipes for Your Favorite Fantasy Foods – Unofficial Recipes from Doctor Who, Game of Thrones, Harry Potter, and more

How do you like my makeover?
New on the Shelves…

1 comment for “Review: The Geeky Chef Cookbook: Real-Life Recipes for Your Favorite Fantasy Foods – Unofficial Recipes from Doctor Who, Game of Thrones, Harry Potter, and more”