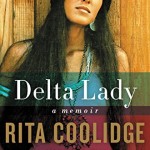 Strange fact: as a kid, I had goldfish named Kris and Rita. I knew who Kris Kristofferson was, and I had some vague idea who Rita Coolidge was – mostly I knew there was an epic romance there. That more than anything prompted me to read Delta Lady: A Memoir

by Rita Coolidge with Michael Walker.

What I liked about the way Coolidge tells her story is that it doesn’t seem gossipy. She talks about meeting music legends in a very matter-of-fact way. There’s a long list of famous names in this book: Eric Clapton, Leon Russell, Janis Joplin, Cher, Tina Turner, and so many more, but they are just Rita’s friends, people she knew back in the day.

I’ve struggled more than a little with this review. While I was interested in the story — how could you not be? — it lacked bite. There’s plenty of drama. There’s sex, drugs and rock and roll. She talks openly about physical abuse in her relationships. But she’s so nice. Even when she’s raking Eric Clapton over the coals for not crediting her on “Layla”, she’s nice about it. She talks about the break-up of her marriage to Kris Kristofferson, but there’s no fire in the words. I was interested in her story, but I wasn’t moved by it.

When I tried to explain that to some friends, one of them commented that it was fitting, really. Rita Coolidge made “nice” music. Not fiery, not ground-breaking. Nice. And that’s true, I think. I remember as I was reading, a passage where she talked about releasing her sixth album. I thought, “Six albums? I don’t think I can name six of her songs.”

The fact is, you don’t have to be a fan of her music to enjoy her book. There are great stories in Delta Lady: A Memoir

about that era of rock music – her time with Graham Nash and Stephen Stills, the Mad Dogs and Englishmen tour, her long and troubled marriage – that make good reading. I just couldn’t help thinking that they might have made great reading if someone else had written them.

My copy of Delta Lady: A Memoir

Have you read any of these “lost books”?
Male Readers Need To Read Books With Strong Female Characters, Too

2 comments for “Review: Delta Lady – a memoir by Rita Coolidge”