Review: Zombies of the World: A Field Guide to the Undead by Ross Payton 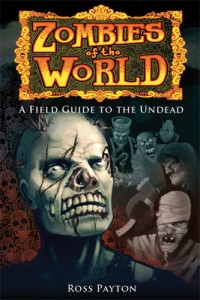 Sometimes, you need a little junk food for your brain. This book was a lot of fun — if you’re a zombie junkie, you’re going to love it. Ross Payton is someone who has spent waaaaay too much time thinking about the undead among us. In Zombies of the World: A Field Guide to the Undead

he has created a whole new zombie ‘verse: there are different zombie species, a history, even ads for clinics doing zombie research. It’s a fun romp through Zombieland.

The book starts with a section on the origins of zombies and current research into their condition. Zombies as a source of cheap, clean energy? Why not!

“Zombies expend tremendous amounts of energy moving their corpse bodies, as their decaying systems operate more inefficiently than a living human…Yet, they walk endlessly until slain. Once the secret of the Omega Anima is cracked, the possibilities are endless: immortality, endless clean energy and more.”

I can’t imagine why no one ever thought of designing cars that run on zombie power!

The best part of the book is the illustrated section on zombie species. There are full-color drawings of all the major zombie varieties, from the Common Gray Shambler and the Chinese Hopping Corpse to the English Foaming Zombie and the North American Cabin Lurker. There is information on their habitats, their habits, their reproduction and their Conservation Status. (The Common Gray Shambler is ranked as Least Concern, since they have a viable, stable population, while the Preta, found only in Asia, is Critically Endangered. The English Foaming Zombie is labeled Must Exterminate – a species which is inimical to human life.)

There are also helpful tips on surviving zombie encounters. Obviously, knowing what species you’re dealing with is a great help, since you would know that to escape the Western Mall Zombie, you just need to distract them with a display of consumer electronics.

“Aim for the legs: Killing a zombie is harder than you might think but disabling one is much easier. If you can knock out a zombie’s knees, you will be able to flee or dispatch it safely. Not applicable to specimens that lack legs.”

Finally, there is The Social History of the Undead, covering ancient zombie myths, Renaissance zombies and the Zombie Rights Movement.

Obviously, this is not going to appeal to the spoilsports who think we are already too zombie-obsessed. But zombies are a classic! I love zombie movies, old and new, and they are certainly more entertaining than sparkly vampires. I was really impressed with the amount of imagination that went into these species descriptions (I’m pretty sure that in most cases, you’ll be able to name the zombie movie from the zombie species profile) and the social history. There are even ads for the North American Necrological Research Institute. This is a great beach read for those of us who don’t want a romance novel and want to use our sunbathing time to get prepared for the zombie apocalypse.

My copy of Zombies of the World: A Field Guide to the Undead

was a review copy provided free of charge. For more on Ross Payton, check out the Zombies of the World website.

2 comments for “Review: Zombies of the World: A Field Guide to the Undead by Ross Payton”