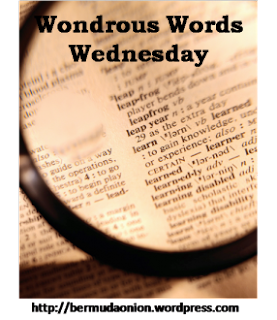 I have been all over the place the last few weeks, so I’m thrilled to be able to post some words this week! The words are from Going Fast by Elaine McClusky. This is a book that I’m reading for the EcoLibris Green Reading Challenge – stop back on November 10th for my review.

Some of these are really interesting! Check them out:

“His body was so tumid, Ownie noticed, that he could have been wearing a padded suit. “

“When purged, the toxins left as caliginous clouds of poison…”

3. Pogey: Financial or other relief given to the unemployed by the government

“There was no pogey or nothing.”

4. Abstemious: Eating and drinking in moderation. Characterized by abstinence or moderation.

“After years of living the abstemious life of an athlete, of honing his body for one narrow purpose, he had decided to party.”

5. Vertiginous: Dizzy; having or causing a whirling sensation.

6. Strathspey: A Scottish dance resembling, but slower than, the reel; the music for this.

“It is time we return to our traditions, to the older strathspeys and reels that speak to the Gaelic heart.”

“How could he argue with Alasdair, who had such a keen interest in the supernatural and the bochdan, along with his gift of second sight.”

8. Agate: Unit of typographical measure. An agate font was commonly used to display statistical data or legal notices in newspapers.

“…the intern had been assigned the sports agate, which took all of his concentration.”

A nice mix of Gaelic words and more common usages. I especially like agate – I love words that I think I know and it turns out they have entirely different meanings.