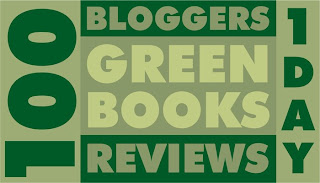 It’s finally here! The Green Books campaign: 1 Day, 100 bloggers, 100 green books, 100 reviews!
Today, there are 100 books being reviewed on 100 blogs around the web, promoting good books and good environmental policies. The boooks are printed on 100% recycled paper. Eco-Libris encourages readers to “balance out” their books – plant a tree for every book you read. It’s a smart idea, and one small way to start going green in your everyday life. And the whole plan did get me a copy of Going Fast, so it’s a win-win situation.

Read more about the Green Books Campaign here. The full list of books and blogs can be found here. 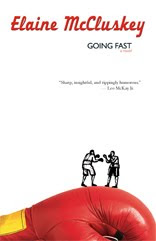 Going Fast is set in the boxing world of Halifax, Novia Scotia. It’s got a full cast of unusual characters, folks who are a bit down and out, a bit on the fringe of things. They are colorful, interesting and just a bit sad, at least to me. Ownie Flanagan is a boxing trainer who wants to train one last, great fighter before he’s through. Turmoil Davies may just be that fighter – he’s big, he’s tough and he’s got…something. Presence maybe. Or possibly some sort of mental illness: he is supposed to be an Olympic fighter, but his mouthpiece is so new it doesn’t have teeth marks and he doesn’t seem at all at home in the ring. He claims, at various times, to have been a hockey player, a policeman, a hair dresser. He tells so many lies that it’s easy to lose track of the truth – if anyone really knows the truth about him.

Ownie is working with Scott MacDonald, a reporter at the local paper, The Standard. Scott’s a former athlete himself, but he’s let himself go to seed without really knowing why. His involvement with Turmoil (and what a great name that is for a boxer!) has Scott re-examining his past. Scott and Ownie believe that Turmoil has a real shot at greatness, and they both want to come along for the ride. The newspaper provides more fascinating characters: Garth Mackenzie, the editor on the brink of a breakdown; Katherine Redgrave, hired gun brought in by the folks at corporate; Glenda, whose engagement is really going to cause problems. Everyone in this novel has a strange story to tell, or to hide.

As Turmoil’s fame grows, his stories and behavior grow more and more outrageous. He shows up at a politicial function, explaining to the assorted bigwigs that everyone is really here to see Turmoil, and someday they will be proud to tell people that they shook his hand. He convinces Ownie to come to Florida and help him train, but once there, he’s cut off from contact with his wife and subject to Turmoil’s strange, late-night visitations. He assaults people working with him, laughs when another of Ownie’s fighters is knocked out – this is a big, dangerous guy who is seriously off-balance.

The book is a bit of a hodge-podge. Lots of interesting stories, stitched together in a general sort of order, but I sometimes found it difficult to follow. If I put the book down for a stretch, I had to turn back and check names to be sure I knew what was happening. The second half of the book flowed a little better than the first, or perhaps by then I was familiar enough with the cast of characters to stay on track. Still, it was definitely an interesting read. Elaine McCluskey tells a good story and her debut novel will keep you turning the pages, because you don’t want to miss the twists and turns.

This book was provided free for review by Goose Lane Publishing.