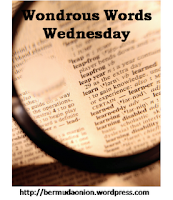 Time for more words! On Wondrous Words Wednesday, we round up all the words from the previous week that we didn’t know and we tell you what they mean. Then, when you read the books we’ve read, you’ll know them, too!
This week, my words come from Mr. Darcy, Vampyre. (You can read my review here.)
1. Ensorcelled: bewitched: under a spell
“She was ensorcelled by him.”
Okay, I admit that I know this one, but it’s such a great word and has such a great sound to it that I had to post it.
2. Ormolu: brass that looks like gold; used to decorate furniture
“the vases of flowers were being replaced with porcelain and ormolu clocks.”
3. Postern: a small gate in the rear of a fort or castle
“It was a nasty moment when the mob broke through the postern gate…”
4. Chamois: antelope; hoofed mammal of mountains of Eurasia having upright horns with backward-hooked tips
“Of wildlife they saw little, only the chamois who ranged over the crags and occasionally some hardy mountain cattle.”
This is a cool word because I always love finding a new definition for a word I thought I knew. I know that a chamois is a cloth, but I thought the animal it came from was a goat, not an antelope.
5. Gentian: In this case, a photo is a far better definition:

“She lifted the candle to see it better and she saw to her horror that the woman peering out from the mass of strange creatures was wearing a spray of gentian in her hair.”