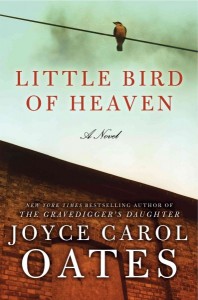 is lovely to read, even when the story is heartbreaking.

Krista Diehl’s family was fine before “the trouble” came.  Her father, Eddy, ran a construction company.  A handsome man, he was well-known around town as a bit of a flirt and a bit of a drinker.  Her mother, Lucille, a stay at home mom, her teenaged brother, Ben.  A happy family until trouble came along in the form of Zoe Kruller.  Zoe was small-town beautiful — she had an exotic name, she was everyone’s favorite at the ice cream shop, she sang with a little rock band on Saturday summer nights at the town bandstand.  When she is found murdered — strangled in her bed — the prime suspects are her estranged husband, Delray, and her lover, Eddy Diehl.

The story is told by 2 narrators — Krista and Aaron, Zoe’s son.  Aaron discovered Zoe’s body the morning after her murder and he may have lied to provide his father with an alibi.  Krista’s family has been torn apart by the revelation that Eddy has been carrying on a long-term affair with Zoe.  Gossip swirls around them as it does in any small town:  Zoe is living apart from her husband and son, she has “male visitors” who are being investigated by the police, there are stories about drugs and prostitution.  Ben and Krista have to deal with the whispers of their classmates.  It is particularly hard on Ben, who goes to school with Aaron.  As a small-town girl myself, I felt great sympathy for those two kids, living in that particular fishbowl.  Oates’ depictions of the raw side of rural life has always seemed very genuine to me.

Banished from the family home, Eddy is reduced to sneaking visits with his daughter after school, driving around town, stopping for dinner at the County Line Bar.  Ben wants nothing to do with his father.  Lucille’s relatives have closed ranks around her; she has her pills and her mysterious phone calls.  She conspires with her son and watches her daughter like a hawk.  Krista still wants to love her father.  She doesn’t believe he could be a murderer and she resents her mother for keeping him out of her life:

I thought Yes I know he has wounded you.  He has betrayed you.  Yes I know you are hurting but I don’t care, I am my father’s daughter and not yours.

Aaron, on the other hand, is on his own.  He and his father live in the same house, but they are no longer really father and son.  He works in his father’s garage and is just waiting to turn 16 so he can quit school.  There are drugs and alcohol and women — Aaron is part Seneca Indian and looks older than he actually is — and there is Krista.  The daughter of the man Aaron believes killed his mother.  An under-age high school girl who has fallen in love with him.

Already in ninth grade at the age of fifteen Aaron Kruller was five feet eleven inches tall and weighed 150 pounds looming over his younger — mostly Caucasian — classmates with the gleaming menace of a switchblade among bread knives.

The murder and its aftermath create a bond between Aaron and Krista.  Eventually, years later, they are brought together again with a chance to gain some closure, an opportunity that brings Krista to an important crossroad.

Joyce Carol Oates, born in 1938, has written more than 40 novels, including several books written under her pseudonyms Rosamond Smith and Lauren Kelly.  Her work has been honored a number of times: she won the National Book Award (them), the PEN/Malamud Award for Excellent in Short Fiction, the Bram Stoker Award (Zombie), and the Chicago Tribune Literary Prize, among many others.  She is the Roger S. Berlind ’52 Professor in the Humanities with the Program in Creative Writing at Princeton University and, since 1978, has been a member of the American Academy of Arts and Letters.

My copy of Little Bird of Heaven