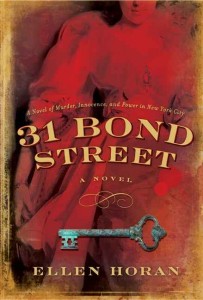 Historically, a woman on her own has always been a woman at risk.  In some cultures around the world, a woman is still not permitted to own property, to have her own money, to walk along a city street in daylight without fear of reprisals.  In 1857, a widowed woman had limited options available to her, but Emma Cunningham was determined to make the most of them.  She enters into an arrangement with a handsome bachelor, Dr. Harvey Burdell, that may work to her advantage…but almost immediately you begin to wonder: who is taking advantage of whom?

by Ellen Horan is an interesting bit of historical fiction, based on the celebrated murder of Dr. Harvey Burdell.  Horan takes a fair amount of liberty with this story, which is detailed in the Author’s Notes.  (I think that’s an excellent move — I don’t mind taking a bit of history and giving it a twist to make it a great story, as long as they acknowledge the twists.)  She fleshes out a number of characters, adds some interesting side plots, making for a very engaging read.

Dr. Burdell was a well-to-do bachelor dentist with a lovely home lower Manhattan.  Mrs. Emma Cunningham was a widow with two young daughters and financial problems.  She was running out of funds and would soon be on the street with her girls.  She does something that most women today would find humiliating — she went off to Saratoga for the summer to find husbands — for her girls and for herself.  She meets Dr. Burdell and eventually, he makes her an offer.  It was common practice for a gentleman to have a widow, usually an elderly woman, stay with him as a live-in house manager.  She would oversee the household staff, meals, entertaining, etc.  Burdell suggests that Mrs. Cunningham could have such a position in his home — and hints that other positions might be available as well.

Mrs. Cunningham immediately comes off as a gold-digger.  She is looking for a home and security, for a man of means to support her and her daughters.  She obviously tends to sink her claws deep into Dr. Burdell and establish herself permanently in his house.  But there are other factors at play.  Mrs. Cunningham still has some funds at her disposal and Dr. Burdell is involved in some shady business dealings.   Is she using him — or is he using her?

There are a number of  subplots running through 31 Bond Street — financial, romantic and political.  There are a lot of threads that lead the reader in different directions and keep you guessing.  The story itself was quite controversial at the time, splashed all over the newspapers, and Horan makes it an engaging read.

My copy of 31 Bond Street

was an Advanced Reader Copy, provided by the publisher, HarperCollins.