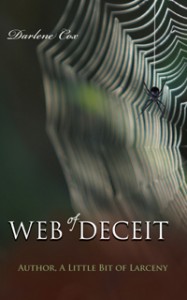 Peter Brock is young, handsome and ambitious.  He is also a man with a plan — The Plan, actually.  He cultivates the friendship of a wealthy businessman, James Campbell, who wants to cut down on the taxes he pays Uncle Sam.  To do this, Peter and James devise a way to transfer profits to secret accounts.  James doesn’t know that The Plan also involves transferring those profits on to even more secret accounts.  Accounts that only Peter knows about.  When people involved in The Plan start turning up dead, Peter needs a back-up plan.

by Darlene Cox has a fairly promising premise; unfortunately, the story just doesn’t hold up.  There are some factual issues that I found annoying (flights from New York to Miami take considerably longer than an hour; the police department can’t charge a law firm with obstruction of justice; when the cops bust a porno production, they don’t give the starlet a pat on the head and a bus ticket out of town, they throw her in jail).  There are plotline problems (any book that ends without answering major questions, with only a TO BE CONTINUED is going to get an immediate thumbs-down from me; the brothel — where Peter mainly goes to enjoy the scented hot tubs, not the girls, yeah, right — seems like someone’s fantasy of high-class whorehouse; although this is a modern setting, no one seems to have a cell phone, using  pay phones and quarters instead).  But mostly, it’s the language that drove me insane.

“‘It just seems that sometimes the smallest thing can appear to be an emergency with Mr. Morrison, but admit I just said that, under no amount of duress would I,’ she grinned, reverting to a play on words tht she and Peter had developed.”

The characters are cartoons.  Jack Morrison, Peter’s partner, is so unremarkable looking that he is almost invisible and he has understood since he was 10 years old that there was something about him that repulsed his classmates.  He never had any friends until Peter came along.  Sheila, their receptionist, is a perfect picture of loveliness: “a striking blonde with smoky gray eyes, peaches-and-cream complexion, and lips lush and desirable.”  And apparently no one minds that she comes to work in a prestigious financial law firm practically naked.

“She was halfway through her routine when she sensed something or someone in the audience drawing her like a magnet. She looked out into the darkness, alert, searching.  It took only a moment to discover the source: a man, alone, sitting at a small table a couple of rows back from the right of the stage.  His eyes spoke of gentleness, of understanding, yet of deep passion, of hidden delights to be experienced.  She knew immediately that this man was not like the others.”

The language ranges from deep purple prose to just plain tortured.  The dialogue is stilted and uncomfortable.  The word choices were almost Victorian in places.  Descriptions are full of flowery adjectives.

“On the one hand, it was a high-class brothel; on the other, a haven for those who just wanted to relax and experience the sensual pleasures of exquisite pampering.  To Peter, Tulips offered a return to the warmth and security of the womb.”

The womb?  Come on!  I spent more time rolling my eyes than reading.

The story had a few twists and turns, but I found most of them pretty well telegraphed.  Briefcases full of cash (they do x-ray those, you know, and there is a ton of paperwork and potential hassles for those carrying more than $10,000), rich Columbian virgins, a wealthy and eligible bachelor who dates multiple women, but none of them have a clue about the others.  I found some of these plot points pretty unrealistic.  Back stories are provided for all the characters, but each is introduced in exactly the same way: a switch to italics and a return to their earliest childhood.

There is the thread of a good story here.  Immigrant boy makes good, gets greedy, stands to lose everything.  With a decent editor, it might have made for good reading.

My copy of  Web of Deceit

was an Advanced Reader Copy, provided by the author.

1 comment for “Review: Web of Deceit by Darlene Cox”