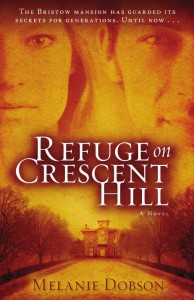 Sometimes, a book is not at all what you expected it to be. You pick up a novel for the mystery but get sucked into the romance along the way, or a piece of historical fiction turns out to be more educational than any college textbook. Of course, this can also be disappointing, as in the case of Refuge on Crescent Hill

by Melanie Dobson. The blurb didn’t mention that this was Christian fiction, which is usually a red flag for me. I am sure there are some great writers in the genre, but in everything I have run into so far, the plot is far less important than the moral the writer wants to convey. In this case, we have the seed of a good story that never really blossoms into a great book.

Camden Bristow has hit rock bottom — freelance photo jobs have dried up and her last employer closed up shop before she got her final paycheck. She takes her only remaining credit card and heads out of town, back to her Grandmother’s house on Crescent Hill. She spent her summers there as a child when her father and stepmother didn’t want her around and she hopes to once again find solace there. Instead, she finds that her grandmother has recently passed away, the house is in disrepair, and she may not be able to save this beloved childhood memory.

Already stressed out and now mourning her grandmother, she encounters a mystery involving hidden treasure, an unseen intruder and deeply entwined small-town loyalties. She must figure out who is on her side and who is working against her, without really knowing where their loyalties lie. From missing jewels and battered women to tales of the Underground Railroad, Dobson throws a lot out there. For me, there were just too many coincidences. Camden arrives just days after her grandmother’s funeral. There is a mysterious letter full of vital (and secret) information, but Camden is interrupted before she gets to the secret part…then the letter mysteriously disappears. The first person Camden meets in town is the man who may hold the house’s future in his hands. And don’t get me started on the graduate student, researching a bit of family history, who just happens to arrive at a crucial moment with surprises of her own. It was all a little too much for me.

There is a lot of talk amongst the characters about their personal relationships with God and every part of the story has a moral. It wasn’t terribly intrusive, but I found that the book was more about the personal and religious backstories, not about the mystery. The mystery depends on some really crazy coincidences and relationships to introduce information and wrap up the story and that really made it hard to suspend my disbelief. The romance angle was completely unnecessary, at least for me; the characters seem to have no interest in each other until a giant leap at the end that came out of the blue.

There is an art to the big reveal in a good mystery. Over time, you have been accumulating clues as well as bits of misdirection. When the culprits are revealed and the clues are explained, they should all make sense. In the case of Refuge on Crescent Hill, I found that some of that Dobson skimped a bit on the explanations. I had questions about why things happened (questions I can’t ask here without spoilers) and that some of the action at the end seemed abbreviated, like she was ready to wrap up and get things over with so we could get to the romance and the moral of the story. There were some good aspects to the story — the tie-in with the Underground Railroad and escaped slaves was especially interesting — but it needed a good editor to point out the unfinished business and help the author wrap things up neatly.

My copy of Refuge on Crescent Hill

by Melanie Dobson was provided through the LibraryThing Early Reviewer Program.

1 comment for “Review: Refuge on Crescent Hill by Melanie Dobson”