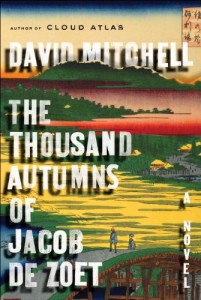 Back in the late 1700’s-early 1800’s, Japan was closed to the world around them.  It was illegal for a Japanese citizen to leave Japan.  It was illegal for foreign citizens to enter Japan, except under the most strictly monitored conditions.  But countries around the world understood that Japan would be a lucrative market and trading partner, if only they could break through those barriers.  The Dutch East Indies Company (the VOC in Dutch) maintained a trading post in Deijma and fought hard to keep lines of communication open with Japan — and to keep their greedy European enemies away.  In The Thousand Autumns of Jacob de Zoet

, a young Dutch clerk hopes to make his fortune — and return home to marry his beloved Anna — but his scruples get in the way.  It is a lovely, poetic book full of tragedy and hardship and great honor.

Jacob de Zoet is too honest to make a fortune trading in Japan.  All around him he finds graft and corruption, and even the men sent in to ferret out the corruption eventually succumb; life would be much easier for him if he were not so honorable.  To make matters more complicated, Jacob falls in love.  This love has even less chance of success than his engagement to the lovely Anna back in the Netherlands.  Miss Abigawa is a Japaneses midwife.  She is disfigured by a terrible burn, making her virtually unmarriageable, but her father is a wealthy Samurai and he has arranged for her to study medicine, inasmuch as a Japanese woman can in those days, and to continue her work as a midwife.  Jacob is captivated by her, but she also has more ominous suitors.

, Thousand Autumns is subject to shifting storylines.  The first third of the book is Jacob’s story – how he came to Nagasaki, how he fell in love, and his rise and fall in the small circle of Dutchmen there.  The second third is Miss Abigawa’s story.  Her life changes drastically after the death of her father, and those changes are a reminder of how little autonomy women had in those days.  Her life was not her own; decisions were made by others for their own profit that left her bereft and there was little she could do about them.  Miss Abigawa also finds herself a prisoner of her scruples.  A bell ringing in the night forces her to make an agonizing choice.

The final third of the book tells the stories that come after — after Miss Abigawa and Jacob are separated, after an enemy assault on the VOC, after Jacob’s time in Nagasaki is finished.  There is both honor and sadness in these stories, and the honor will have to suffice, because happiness is in short supply.

.  I had never read anything quite like it and I resolved to find all of his books and read them immediately.  That didn’t quite happen, but they are still high on my To Be Read list.  There is a poetry to his writing – his descriptions are lovely, even when he describes very ugly things, and the picture he paints of Nagasaki is clear in my mind: buildings, gardens, beggars, courtesans and the smell of the sea and the sewage.

This is not a thriller or a mystery, but I found it very suspenseful.  There are multiple storylines and I was intrigued to see how they would come together and where they would end.  It’s also part of the mysterious “Dutch Connection” that has developed in my reading: as I have been spending a lot of time in Amsterdam for work, I have found that several of my recent books have had some connection to the Netherlands (or to brothels, as does this book). I found it a quick read, devouring the nearly 500 pages in three short sittings.  I will be recommending this to friends and readers at my website, and a few lucky family members may find it, bedecked in ribbons, under their Christmas trees.  This was truly a remarkable read.

3 comments for “Review: The Thousand Autumns of Jacob de Zoet by David Mitchell”