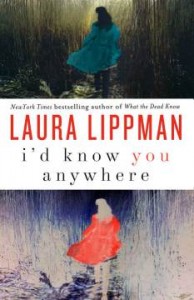 Walter Bowman is scheduled for execution in just a few weeks.  He has one final chance — and one secret ally — to bring out his version of the truth, and perhaps convince the governor to spare his life.  But it all depends on Elizabeth Lerner. I’d Know You Anywhere

tells the story of those final weeks, Walter’s last-ditch efforts, and Elizabeth’s search for closure.

This is a very interesting premise.  Thinking about it, I can understand Elizabeth’s dilemma.  Of course, she doesn’t wish that Walter had murdered her, but she has to wonder why he spared her.  Did he love her more than the others?  Was she less attractive to him than the others?  Was he working up the courage for some desperate final crime?  It’s the sort of thing you would think about on sleepless nights.

Elizabeth has moved on.  As a teenager, her parents moved to a new town, she began using the name Eliza, eventually she married and moved to London with her husband.  She has distanced herself from her old self, from the victim that she was, and built a new life, a life that is thrown for a loop when she gets Walter’s letter.  I’d know you anywhere. He saw her picture in a magazine and tracked her down.  He obviously has an ally on the outside, otherwise, he never would have been able to write to her.  There are a lot of unspoken threats there: I can inform the media, I can tell your new friends, I could give a final interview and implicate you in some way.  These feed on Eliza’s uncertainties, the delicate balance in her family, recently returned to the US from years abroad.  He dangles the prospect of finally getting some answers in front of her, but she knows how well he was once able to manipulate her.  Is it worth the risk?

One thing about the Lippman books I’ve read — there always seems to be a character I want to smack some sense into, and in this case, it’s Eliza.  She knows he’s a liar, she knows he’s a manipulator, she knows that every contact she has with him draws her in deeper and makes her more vulnerable, but she does it anywhere.  I wanted to shake her and say, “Tell him to go to hell and remind him that his ticket on that train is about to get punched.  Do not give him the satisfaction of tormenting you any more.”  But you know from the start she isn’t going to be able to resist.

It’s a difficult position.  She has a new family and a very new, tenuous life in Maryland, not far from her old hometown.  Her new acquaintances — it’s too early to call them friends — don’t know about her past and they would surely look at her differently if it came out.  Her children are trying to adjust to a new school and a new culture and they don’t know anything about “the summer she was fifteen.”  She doesn’t feel ready to tell them.  He holds her anonymity hostage, and forces her to let him back in.

I was pleased with the ending, even if I think I would have handled things differently.  It seemed perfectly in keeping with what we’ve learned about Eliza and how she has reacted to all of this.  It tells us a lot about Walter and about his secret ally, easily the most pitiable character in the story.  There’s enough mystery to keep you reading and it made me think — really think about how hard it must be for Eliza to put all this behind her.  Thinking is always a good thing.

Laura Lippman grew up in Baltimore and was a reporter for the Baltimore Sun. She has published 10 Tess Monaghan novels and 5 stand-alone novels, including a book I reviewed earlier, What the Dead Know.  My copy of I’d Know You Anywhere

1 comment for “Review: I’d Know You Anywhere by Laura Lippman”